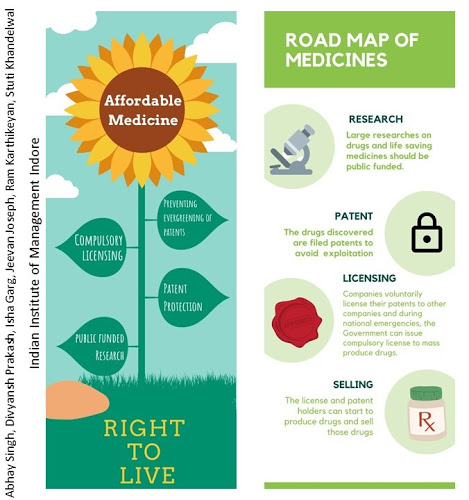 The first traces of SARS-CoV-2 virus (severe acute respiratory syndrome coronavirus 2) were discovered in November, 2019 in Wuhan, China. Since then, the novel coronavirus disease (COVID-19) has transformed from a local disease into a global pandemic. While countries across the world, rich and poor, are fighting the pandemic with all force, a common problem which stands in their way is the uneven distribution of resources and services in their societies. It is evident that a country cannot develop sustainably with the sole emphasis on the business motive of expanding profits, or enlarging the pie. Equal attention has to be paid to the distribution of this pie amongst the people. The division of resources must be sensitive to inequalities which manifest in various forms such as income, social, and gender disparities.

Speaking in one of the online sessions of Sustainable Development e-talks (#SDGtalks) co-hosted by Indian Institute of Management Indore and CNS, Anand Grover, a noted Supreme court lawyer and former United Nations Special Rapporteur on the Right to Health, explained how the human right to health is included in the right to life, enshrined under Article 21 of the Indian Constitution. He said that, “The right to life includes the right to live with dignity”. However, the right to health can only be realized by ensuring accessibility and availability of medicines to all. The current pandemic of COVID-19 has forced the health system to test its ability to provide adequate healthcare services to all those in need.

Triumph in the fight against diseases can be made possible through the collective efforts of the governments, the pharmaceutical industry and the people. The pharma industry invests billions of dollars in the development of diagnostics and treatments. But when these enter the market and seem within grasp, they remain far from the grip of many. This is due to the high price tags attached to them. According to Grover, “Cost of medicines is one of the key factors that affect the right to health”.

The cost of medicines is heavily influenced by patents. Patent is a negative right which is a trade-off between public and private interests. “Patent law has an impact on the right to health and access to medicines as it creates and protects monopolies”, believes Grover.

Monopoly pricing power is the right of a pharma company to decide the price of a patented drug. The patent duration depends upon the drug and Intellectual Property laws of the country. Pharma industries often misuse this power to increase their profits by wide margins. Nevertheless, this can be controlled to a large extent through government interventions. The policy frameworks equips the government with the power to maintain free and open markets.

Patents are of two kinds- patents on process and patents on product- as explained by Grover. A patent on a product disqualifies any entity, other than the patentholder, from selling the product. On the contrary, patents on process allow other entities to sell the drug by altering the process of manufacture. Such drugs are usually known as generic medicines. India has emerged as the hub of generic drugs that have helped to make life saving medicines become affordable and accessible to all, as exemplified by the case of drugs to treat HIV/AIDS. In 2000, the patented HIV drugs costed about US$ 10,000 per year treatment, per person. Generic drugs of Indian companies, made them available at US$ 200-250 per person per year. Today, these drugs cost around US$ 20-30 per month per person. Grover informs that the unique selling point of the HIV movement is the strong community participation that went a long way in achieving reduction in prices of HIV drugs.

When pricing is left unchecked, private healthcare services can engage in drug price inflation. For instance, Gurugram’s Fortis hospital (in the private sector) issued a whopping bill of Rs 16 lakhs for a 15-day-treatment of a 7-year-old dengue patient. The girl later died, after spending days on a ventilator. Investigation revealed that the hospital had charged an outrageously high amount for the treatment. The margin on medicines and other consumable products ranged from 25% to 1700%. For example, Rs.200 were charged for each disposable syringe procured at Rs.15.29 by the hospital. And this is not a one-off incidents, showing the blatant greed of the private healthcare sector in putting profits far above the people's good.

Licensing framework serves as a check against these practices, in case of patented drugs. There are two types of licenses – compulsory and voluntary. A compulsory license can be issued by the government, without the consent of the patentholder, to other entities for drug production. Voluntary license is granted by the patentholder to other manufacturers for production of drugs for specific regions. Compulsory license, if issued for public interest, is completely legal and aligned with the Trade-Related Aspects of Intellectual Property Rights (TRIPS) agreement and the Indian Patent law. Price control can also be exercised through the Drug Price Control Order (Essential Services Act). However, patented drugs are exempted from this for a period of five years.

Grover worded the question, about COVID-19 drugs and vaccines, that needs immediate attention as, “Will the governments issue compulsory licenses or will the companies resort to voluntary licensing and exclude certain countries?”

The primary aim of intellectual property laws is to protect the authenticity of ideas and foster innovation. It serves as a tool for augmentation of investments in research and development. In the healthcare industry, it facilitates discovery of new drugs and improved treatment methods. But the sanctity of this legal framework is, more often than not, annihilated by the profit-oriented practices of private players, wherein pharmaceutical companies misuse patents to extract huge profits by charging exorbitant prices for the patented products. Trying times, like the current pandemic, intensify the gap between equal accessibility of healthcare to all and profit motives of the private players. The legal framework bestows the power to issue compulsory or voluntary licensing as pre-emptive measures against the same. Nonetheless, the difference exists. Ergo, it is the need of the hour to bridge this gap, and make 'Availability of Healthcare to All', a reality.

(authors are students of Indian Institute of Management (IIM) in Indore, India

and part of the internship at Citizen News Service - CNS)