Will advances in TB treatment outweigh the Covid-19 pushback? By Shobha Shukla 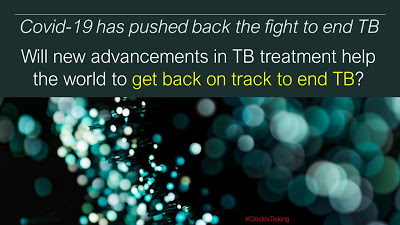 The impact of the COVID-19 pandemic on TB diagnosis and mortality in 2020 has been frightening, to say the least. Recently released WHO data shows that 1.4 million fewer people got TB care in 2020 as compared to 2019- a 21% decrease. Also over 0.5 million people died from TB in 2020 due to lack of diagnosis. Latest data by Stop TB Partnership shows that in 9 countries (Bangladesh, India, Indonesia, Myanmar, Pakistan, Philippines, South Africa, Tajikistan, and Ukraine) which together account for 60% of the global TB burden, TB diagnosis and treatment enrolment in 2020 declined by 1 million - a drastic reduction of 23%. Globally, in 2020 there was an estimated drop of at least 1 million in TB treatment enrolment, pushing the TB response to 2008 levels in terms of people diagnosed and treated.

A modelling analysis done in May 2020 found that even short COVID-19 related lockdowns can generate long-lasting setbacks in TB control, due to disruption in routine TB care services. A 3-month lockdown followed by 10-months to restore to normal could lead to an additional 6.3 million cases of TB and an additional 1.4 million TB deaths between 2020 and 2025 globally. In India the disruptions are expected to cause an additional 1.19 million TB cases and 361,000 TB deaths over the next 5 years.

However, while the TB care and control situation is very grim, it is not a lost cause. Even amid the global pandemic, TB treatment innovations have advanced at an unprecedented pace, thanks to the untiring efforts of our scientific community. Encouraging results from some phase-3 clinical studies of new drug regimens provide the much needed hope of better and more patient-friendly treatments for drug-susceptible as well as drug-resistant TB.

Shorter and all oral regimen for XDR and MDR-TB

At CROI 2021, Dr Pauline Howell of the University of the Witwatersrand, South Africa, presented a new analysis based on two years of the Nix-TB study, in which approximately 90% of the patients with highly drug-resistant TB who were treated with a 6-month, all-oral regimen of pretomanid, bedaquiline and linezolid (BPaL) remained free of their disease. Pretomanid, which is used in this regimen, is a new chemical entity developed by TB Alliance.

The study thus shows that XDR-TB and complicated MDR-TB can be treated with a 26 weeks long all oral 3 drug regimen with a 90% success rate, which is similar to that obtained with the standard of care in the treatment for drug-sensitive TB. Currently used regimens have had a success cure rate of only 34% for XDR-TB and 55% for MDR-TB cases. Moreover, they routinely last for two years or longer and are very costly.

In her presentation at CROI, Dr Howell shared that, "Results of this simplified, shortened, and all-oral regimen for highly drug-resistant TB show sustained high efficacy through a 2-year follow-up from end of treatment. A follow-on trial ZeNix that investigates the optimal dose and duration of linezolid in the BPaL regimen, has recently completed enrolment. The objective of this study is to evaluate if the efficacy of the BPaL drug regimen can be maintained, while reducing toxicity and increasing tolerability through a shorter linezolid duration of 2 months and/or its smaller dose of 600 mg (as compared to the current 1200 mg dosage). We look forward to the primary endpoint 6 months into post treatment results."

Meanwhile, WHO has recommended the BPaL regimen under operational research conditions and it has also been authorised by the European Medicines Agency.

In an exclusive interview given to CNS (Citizen News Service), Dr Howell said,"TB Alliance is studying this regimen in multiple countries. Operational research is now underway in at least 5 countries with many more expected to join this year. Physicians in USA are prescribing the regimen under routine practice conditions. The regimen was approved in India by the Drug Controller General of India (DCGI) last year. The ZeNix trial is taking place in Russia, Georgia, Moldova and South Africa, evaluating different doses and durations of the drug linezolid as part of this regimen. They have also partnered with MSF to evaluate BPaL-based regimens for all people with DR-TB (at least rifampicin-resistant TB), and not just highly drug-resistant strains."

In the 3rd episode of The Dose Podcast series, that was released on World TB Day 2021, Dr Susan Dorman, an infectious disease expert at the Medical University of South Carolina, shared the exciting results of the US Centers for Disease Control and Prevention (CDC) Tuberculosis Trials Consortium (TBTC) Study 31/A5349, which she has been closely involved with.

Giving details of the study, Dr Dorman said, "The study enrolled 2500 participants in 13 countries in the regions of Africa, Asia, South America, and North America. It included adults and adolescents and also people living with HIV. Primary endpoint was the percentage of participants who were cured and remained cured till 12 months after completion of treatment. The key findings from the study were that the regimen containing both rifapentine and moxifloxacin was as effective as (or non-inferior to) the standard 6 month regimen in curing drug-susceptible pulmonary TB. While the standard 6 month regimen cured 85% of the participants in the control arm, the new regimen cured 84% of the participants in all its sub groups. In fact the overall efficacy results for HIV positive sub-group were higher at 85% as compared to 78% cure rate for participants who were living with HIV in the standard of care regimen group. We are now going ahead to see if this new regimen is also appropriate for populations that were not included in Study 31- like young children and pregnant women."

The other 4-months regimen (without moxifloxacin) did not meet the non inferiority criterion, although its safety and tolerability was comparable to the 6-months regimen, informed Dr Dorman.

Study 31 clearly demonstrates that a treatment regimen containing rifapentine and moxifloxacin along with isoniazid and pyrazinamide can effectively and safely cure drug susceptible pulmonary TB in 4 months.

However, translating scientific evidence of clinical studies into public health benefits is not an easy task. The path to global adoption of the scientifically validated shorter and better regimens is not very straight, rightly says Dr Stephen Gillespie, Professor of Medicine at the University of St Andrews. While he was speaking in the context of the shorter regimen for drug-susceptible TB, the same holds true for newer regimens for drug-resistant TB as well.

In Dr Gillespie's opinion, "Next steps are more difficult. First is getting the approval by WHO and regulatory authorities in different countries. Then the Ministries of Health have to come up with the funds to buy the new drugs to adopt the new regimens in their national TB control programmes. We have also to engage with the community and inform TB patients that new and better regimens are available. Also, the one constituency, which we perhaps do not think about, are the physicians themselves who could be very conservative at times. Many might say that a longer regimen is better for TB treatment. So we have to address the issue of physicians' education as well."

These two studies demonstrate the latest breakthrough in global efforts to create shorter and better treatments for drug-resistant as well as drug-sensitive TB, which are urgently needed to treat all patients with TB and achieve the WHO's End TB Strategy targets. Equally important is to ensure that clinically validated shorter TB regimens are made accessible to those in need of them as soon as possible.

Let us not forget that 10 million people are affected with TB every year and 1.4 million die. There are many similarities between TB and COVID-19. Both are airborne infections transmitted through breathing and affecting primarily the respiratory tract. Also, people affected by TB are at a higher risk of adverse COVID-19 outcomes.

And as Dr Howell says, COVID-19 has become a significant challenge for health systems who are also burdened by drug-resistant TB. However, by adopting short, simple TB regimens that are easier to manage, patients have the potential to complete their treatment with fewer chances to contract or spread COVID-19.

But the question that plagues the minds of TB researchers and activists is: Does TB, the top infectious disease killer, not deserve the same political commitments and investments that we have seen in 1 year of COVID-19?

While USD 90 billion has been spent on Covid-19 vaccines (including research and development, procurement and delivery of those that have been rolled out) this year, a mere USD 1 billion has been spent in 10 years of TB vaccine research. Is it because the pandemic has affected the rich and poor alike, but TB still remains largely a poor person’s disease?