Lessons from COVID-19: Need for universal healthcare and socio-economic equality. By Neha Mazumdar 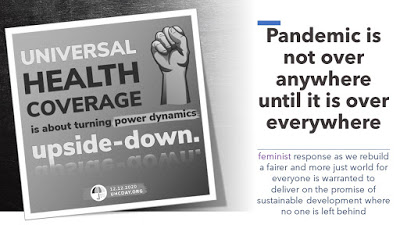 COVID-19 was first detected in India on 30 January 2020, the same day when the World Health Organization had formally declared a public health emergency of international concern. Since then, the number of cases in our country has risen exponentially, inching towards 10 million. To gain a better understanding of this pandemic and why it has affected our country so heavily, we reached out to Shobha Shukla and Bobby Ramakant of CNS. Bobby feels that although COVID-19 has had significant negative impacts, it has brought the need for better healthcare policies to the forefront.

learning from history and past experiences

India's failure to learn from its mistakes is one of its biggest challenges. Let's consider 2 examples to further elucidate this point - the first being tuberculosis (TB).

India has been battling with TB for many centuries. Despite having scientifically assured processes for diagnosis, prevention and treatment, India still has a large number of recurring cases each year (2.69 Million in 2019 (TB Statistics India, 2019)) as well as untimely deaths due to TB. When TB is preventable and curable, then how can we explain it to be the world's top infectious disease killer?

The lessons we learnt from TB should have highlighted the need for better distribution networks for healthcare, other obstacles that prevent people from accessing care, especially keeping the national goal of ending TB by 2025 in mind. These lessons will be extremely crucial when it is time to roll out the COVID-19 vaccine, as well as, for ending TB.

The second example is that of HIV and the forgetfulness of the rights-based approach which was used by those living with HIV to push for health as a human right. This approach helped the HIV community-led movements as well as other groups struggling to get a voice e.g. sex workers, LGBTIQ+ movements (Krishnan, 2018) etc. Similar rights-based approach could be and should be adopted when demanding equitable healthcare during COVID-19.

Bobby’s example of Thailand from his days of working with the HDN help to appreciate the opposite case. Thailand is an exemplary case of how COVID-19 should be handled and has received praise from WHO (Thaiger, 2020). Bobby believes that Thailand’s investment in the 30 Baht scheme and their important decision with a foresight to increase healthcare investment in smaller towns and villages while simply maintaining the standards in bigger cities during economic recession several decades back, has put them in a suitable position to offer universal health coverage in present day. Whether it be heart disease, TB or HIV Thailand has not held back and sustained progressive scientific voices. This layering of groundwork and learning from past mistakes has helped them handle the COVID-19 crisis a lot better.

adopting a feminist approach to healthcare

To a large percent of the population, feminism is equivalent to matriarchy and opposite to patriarchy. However, CNS founder Shobha Shukla helped to point out that the opposite of patriarchy is rather solidarity, sensitivity and power-sharing. These three pillars form the basis of a feminist approach. She also believes that to ensure a feminist approach, social and economic inequalities must end.

Let us again consider the case of TB in India to understand this. Between a quarter and a third of the world’s population are estimated to be infected with latent TB. According to the WHO, on average, 5-10% of those who are infected with latent TB, will develop active TB disease over their lifetime. Every new case of latent TB infection is a sign of failing infection control. But government’s programme to end TB is largely focused on diagnosing and treating active TB disease, with little attention to latent TB 'pool'. Factors such as malnutrition, diabetes, HIV, anemia or other conditions that lower our immunity, are likely to increase the risk of conversion of latent TB into active disease.

What does this mean? It means that certain demographic classes who face higher levels of social and economic inequality will have higher likelihood of contracting active TB. Because "reactivated" TB is contagious, eradicating latent infection is a cornerstone of global TB control.

Hence, to provide equitable healthcare, all such issues must be addressed simultaneously - for instance, we cannot end TB unless we end malnutrition - the biggest risk factor for TB disease.

Generally speaking, woman's role in Indian society is still one of a primary caregiver and hence they have low workforce participation (~20% for India as compared to ~60% in Thailand (Thailand: Female labor force participatio, 2020), (Women in the Workforce – India: Quick Take, 2020)). Females in India have been shown to exhibit poor health-seeking behavior i.e. they only seek help when responsibilities are unable to be carried (Rahul Katiyar, 2018). Conversations which focus on women’s rights, entitlements, and privileges rather than mere responsibilities might prove helpful.

Shobha Shukla further brought in her personal experiences of how she witnessed many a woman thrown out of her house for contracting TB, whereas a man in the same household was accepted and cared for. Women have also shown higher percentages of completion of TB treatment (Partnership, 2018). By empowering women caregivers, we can further the overall healthcare levels since women will be better equipped to take care of their family members and encourage them to be mutually responsible.

Although several male policy makers are adopting women-friendly approaches, the need to have women decision-makers in these policy bodies doesn’t reduce. Men often have difficulty in understanding women’s day-to-day challenges. Shobha Shukla provided an example of how when distributing menstrual pads for women, men failed to understand that a typical type of underwear would be required for the scheme to fully work. This type of instance also stems from a lack of awareness and discussion around female sexuality. Bobby further reflected on this from his time in Thailand - Thailand’s office culture was expressive and open about female menstruation and breastfeeding on the premises was not taboo. This empowered the women employees to carry out their office tasks with dignity while staying true to themselves.

role of media and effective communication with the masses

Bobby believes that India could have improved its short-term strategy through better messaging and communication regarding prevention and spread of the disease. For example, educating citizens regarding the proper mask etiquette in closed spaces and the nature of COVID-19 virus - its tendency to remain suspended in air for up to 15 minutes.

Mainstream news channels and media hold high influence over the thoughts of a common citizen. Even a small change in language from ‘prostitute’ to ‘sex worker’ by the media, imparts dignity and sets precedence for making rights-based language a norm. Hence, media needs to be cognizant of critical matters and give voices to those who are unable to speak for themselves.

Instead, what we witnessed during COVID-19 was a large deviation from the same and criminalization of behavior of certain individuals or communities (e.g. the controversy of Tablighi Jamaat) which only served to create an atmosphere of animosity. Media's responsibility in times of crisis and information asymmetry is to the citizens of the nation - to minimize the spread of fake news and ensure fact-based journalism.

Decisions undertaken to maintain political appearance need to take a backseat - Implementing a nationwide lockdown, was taken without much thought of the several communities and their livelihoods. For example, millions of migrants had to expose themselves to larger risks due to the lockdown than they might have had to alternatively.

Bobby pointed out that the major reason why all countries seem to be pulling out all the stops is that COVID-19 (unlike TB) is not just a disease for the poor. It has affected the ‘rich and the powerful’ who have influential power over our policy decision-makers.

However, pro-people politics has proved its importance in terms of the ability to combat the pandemic. Taking an example of Indian states, if we compare Kerala’s preparedness as well as their other socio-economic indicators with other counterparts, we can see a clear difference that pushed them over the top in terms of COVID-19 preparedness and response.

After discussions with Bobby and Shobha, one thing is clear to me - A model that focuses on pure economic development instead of sustainable development will only worsen conditions. We need to use this opportunity as a source of learning – to improve our healthcare by improving our other socio-economic policies and giving a voice to the marginalized. A feminist society grounded in empathy and equality will lead the way for our development.

(Neha Mazumdar is currently a student at Indian Institute of Management (IIM) Ahmedabad who hopes to be a driver for change someday. She is currently consulting on a TFI project, through which she hopes to provide sanitary and hygienic living conditions to all. She has previously worked as a Software Developer and volunteered with multiple NGOs) 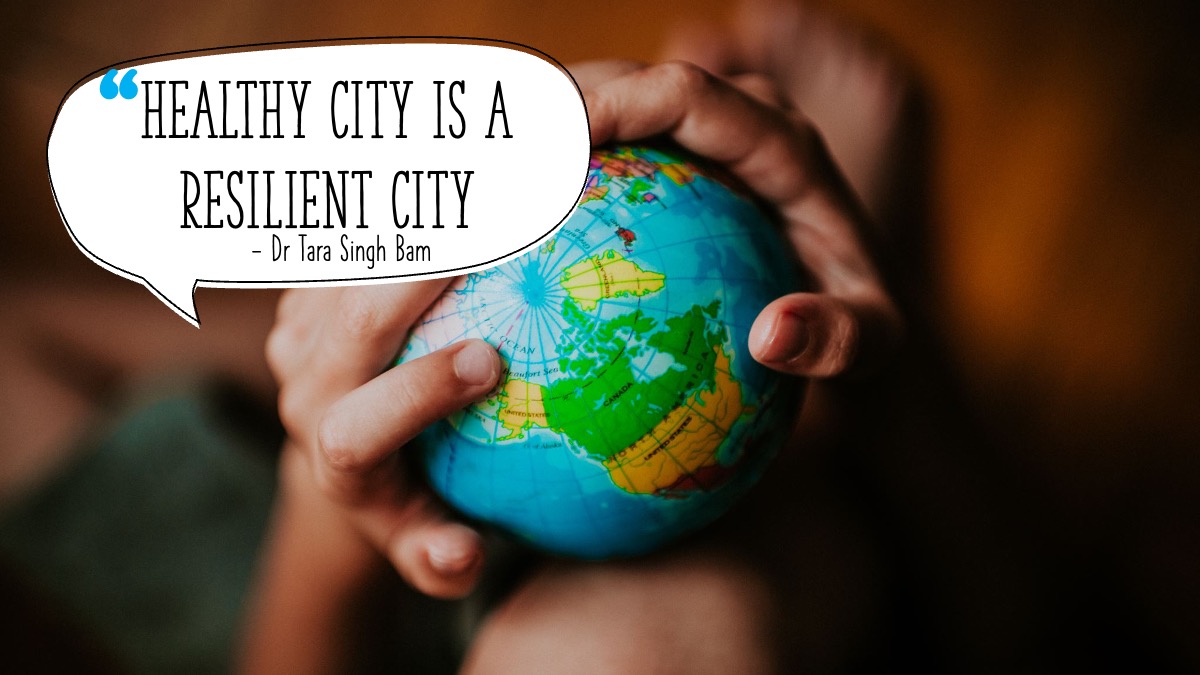 Build the world we want: A healthy future for all. BY SHOBHA SHUKLA

So goes the theme of this year’s (2022) Universal Health Coverage Day. Air to breathe, water to drink and food to eat are the three bas