A Lucid Translation of the Quran. By Yoginder Sikand 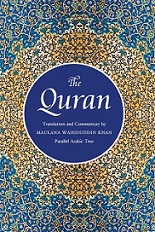 New Delhi-based Maulana Wahiduddin Khan is among India’s most well-known religious scholars. He is one of the leading advocates, at the global level, of inter-community understanding and peaceful relations between people of different faiths. Author of some 200 books on various issues related to Islam, the Maulana has come out with a lucid English translation of the Quran. Using simple, easily-understandable modern English, the translation comes with and without the Arabic original, and in different sizes. Additionally, it is available in different digital formats as well as in Braille. It is also published as a hardbound volume, along with the Maulana’s English commentary or tafseer. The get-up is beautiful, and the quality of printing excellent.
Work on the translation, which began in 2007, took almost two years to complete. In this, the Maulana was assisted by various Islamic scholars and his daughter and translator of several of his books, Farida Khanam. In addition to the English translation, the Maulana has also translated the Quran into Hindi and Urdu.
Numerous translations of the Quran already exist in English, and so what made the Maulana decide to add one more to that number?
“The answer is simple,” says the Maulana. “Many other translations lack clarity, which, according to the Quran (54:17), is the speciality of this Book. My translation is very clear and easily understandable. A research of the various Quran translations in English was undertaken by The Quran Complex, Madinah, Saudi Arabia in which they concluded, ‘In spite of 47 English Quran translations, none has received the acceptance of the modern world.’ The reason of this non-acceptance was that these translations were not in the modern idiom, while my translation is so. In terms of style, it is very simple. Its language is modern. In terms of idiom, it is contemporary. It is free from the interpretations that were included in translations in later times.”
The Maulana cites some examples to illustrate this difference between his and that of some other translations. For instance, he points out that the widely-read Abdullah Yusuf Ali translation renders a Quranic verse (2:129) as ‘Our Lord! send amongst them a messenger of their own, who shall rehearse Your signs to them and instruct them in Scripture and wisdom, and sanctify them’, while the Maulana’s rendering, which is in more contemporary language, is as follows: ‘Our Lord, send forth to them a messenger of their own to recite your revelations to them, to teach them the Scripture and wisdom, and purify them.’ Similarly, while Muhammad Muhsin Khan translates the Quran 1:6-7 as ‘Guide us to the Straight Way. The Way of those on whom You have bestowed Your Grace, not (the way) of those who earned Your Anger (such as the Jews), nor of those who went astray (such as the Christians)’, the Maulana renders it as ‘Guide us to the straight path, the path of those You have blessed; not of those who have incurred Your wrath, nor of those who have gone astray.’
There is another difference between his translation and that of some others, the Maulana relates. “Some other translations reflect the wrong ideas prevalent among Muslims,” he says. “For example, some Muslims believe that jihad, in the sense of fighting, is the greatest teaching of Islam. This concept is undoubtedly wrong, but this concept has, in various ways, found place in the translations of the Quran. My translation is completely free of this misconception.”
In the last four years, Goodword Books, the New Delhi-based publishing house that has published most of the Maulana’s books, has distributed about two million copies of the Maulana’s translation of the Quran. Various mosques round the world keep this Quran translation, including the Blue Mosque and Rustem Pasha Mosque in Istanbul, the Al-Aqsa Mosque in Jerusalem, and various Islamic centres and mosques in the UK, USA and Canada. In several mosques and other Muslim institutions, copies of this translation are made available for free distribution to visitors and worshippers alike.
With the help of volunteers of the Centre for Peace and Spirituality that Maulana heads and that aims, as its website says, to ‘promote and reinforce the culture of peace through mind-based spirituality’, the Maulana’s translation of the Quran is made available through a chain of ‘Quran Distributors’ across the world.
For a free copy, log on to http://cpsglobal.org/quran/free
For details about the Al-Quran Mission launched by the Maulana, see http://www.alquranmission.org/
For books by the Maulana, click on http://cpsglobal.org/books/mwk