General El-Sisi and Correcting the Democratic Path in Egypt. By Boutros Hussein and Lee Jay Walker 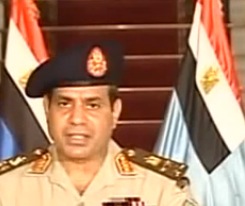 General Abdel-Fattah El-Sisi hinted strongly that he would run for the presidency of Egypt providing it is the“request of the people.” Of course, El-Sisi is in the driving seat for many Egyptians because vast numbers look at the situation in Iraq, Libya and Syria – and know full well that chaos to a much greater extent could have ripped Egypt apart. Therefore, with the path ahead still fraught with danger because of militants within the Muslim Brotherhood then it is essential that all major institutions become strengthened throughout Egypt.
Indeed, El-Sisi stated about the upcoming referendum on the amended constitution that the result would “correct the democratic path and build a democratic modern state that satisfies all Egyptians.” In other words, El-Sisi is focused on stabilizing Egypt and using the armed forces to crush Islamist terrorism in the Sinai and in other parts of the country along with tackling the serious issue of the Muslim Brotherhood. At the same time, El-Sisi wants to “build a democratic modern state” while tackling many complex issues which threaten to turn the clock back.
Some ultra liberals are also endangering the state because their demands are unrealistic during the prevailing conditions. Indeed, extremists across the political spectrum need to be reigned in within the legal framework of Egypt. Of course, ultra liberals are not a threat directly to the armed forces of Egypt. Despite this, the nation can’t be held to ransom by perennial mass demonstrations, which challenge central authority and the same applies to divisive policy objectives. Therefore, El-Sisi is trying to lay the foundations of a strong central state, while gradually building mechanisms that will lead to a strong civil society based on democracy.
In order to reach this important objective then all terrorist and Islamist militant forces must be crushed. Alongside this, the intrigues of outside nations like Qatar and Turkey must be pushed back and the same applies to the estrange policies of America. Egypt does not desire negative relations with any nation but neither will El-Sisi tolerate outside meddling. Also, the role of Hamas needs to be tackled because clearly you have many ratlines emanating from the Gaza Strip with regards to the Sinai region. Alongside this, Qatar and Turkey are both increasing their respective leverages within the Muslim Brotherhood camp in Gaza and much further afield.
Once more El-Sisi understands fully that internal forces within the Muslim Brotherhood and external forces outside of Egypt had tried to destabilize the nation state. However, when the masses rose up in Egypt against the Muslim Brotherhood in unison with the alertness of individuals like El-Sisi; then a future nightmare was prevented. This future nightmare applies to the gradual take over of all major institutions by the Muslim Brotherhood who desired to turn the clock back. At the same time, internal and external forces had also planned to destroy the economy of Egypt by spreading sectarianism, sowing divisions within Egypt and by countless terrorist attacks if they didn’t obtain their political objectives.
Luckily for Egypt, the enormous chaos that continues to blight Libya, Iraq, Syria and Yemen was prevented. The reasons behind containing sinister forces were based on tough decisions being made by El-Sisi and other powerful individuals within the body politic of this nation. Of course, Egypt is still threatened by militants within the Muslim Brotherhood, an array of terrorist groups and outside intrigues. Yet clearly, Egypt was prevented from being another failed state because of the actions of the masses and based on the important role of individuals like El-Sisi.
In time El-Sisi wants to “correct the democratic path” but he knows full well that this can only be achieved by protecting the economy from the intended chaos of the Muslim Brotherhood. Likewise, in order for a civil society to emerge under a democratic state then all dangerous movements opposed to a modern Egypt must be crushed. Similarly, the nation state needs to preserve the independence of Egypt because Iraq, Libya, Syria and Yemen were all destabilized by outside forces.
El-Sisi said: “If I run for presidency, it would be by the request of the people and by a mandate from my army, as we work within a democracy.”
This is a million miles away from the treachery of the Muslim Brotherhood because this movement wanted to usurp the state. Only time will tell what Egyptians will decide for their future but clearly in El-Sisi many vast numbers of Egyptians know that they have an individual who is ready to safeguard the future of Egypt. After all, if El-Sisi did not protect the wishes of the masses then today Egypt would be sliding into a dark period of history based on “year zero Muslim Brotherhood policies.”
http://english.ahram.org.eg/NewsContent/1/64/91343/Egypt/Politics-/ElSisi-would-run-for-president-if-the-people-reque.aspx
leejay@moderntokyotimes.com
http://moderntokyotimes.com