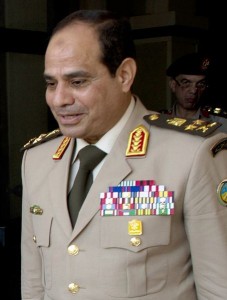 Field Marshal Abdel-Fattah El-Sisi appears likely to run for the presidency given the perilous situation in Egypt. It is easy for skeptics to drum up the Hosni Mubarak era but what can the same skeptics says about Afghanistan, Iraq, Libya, Pakistan and Syria? In all the above, with the exception of Pakistan which helped to destabilize itself based on their shared agenda with America, Saudi Arabia and the United Kingdom in the 1980s and early 1990s; it is clear that external nations have created mass instability whereby daily suffering is a reality. Therefore, El-Sisi must be judged on preserving the nation state of Egypt against the dark forces of the Muslim Brotherhood along with the dangerous shadows of the Obama administration and nations like Qatar and Turkey.
Ultra liberals should note that while socialists, secularists and liberals were arguing during the Iranian 1979 Revolution; the reality soon dawned on them that a new controlling power would govern them based on Political Islam. El-Sisi clearly understands the excesses of the Mubarak period and the sinister forces of the Muslim Brotherhood. He also fully understands that the enemies of Egypt are trying to utilize the terrorist reality that currently exists in the Sinai region; ongoing militant Islamist discontent aimed at weakening the nation state; economic issues based on destabilization; sectarian forces; and other essential areas related to the infrastructure and centralization. This reality means that El-Sisi knows that he must tread a fine line between preserving the nation state, protecting people from terrorism and sectarianism, empowering important institutions and putting Egypt on the firm path of democracy.
Militants in the Muslim Brotherhood and a plethora of Islamist organizations and terrorist groups desire to see democracy fail. Similarly, the role of Qatar and Turkey can’t be trusted and clearly the Obama administration is tainted by its pro-Muslim Brotherhood policies. Egypt also needs to balance its close relationship with Saudi Arabia by focusing this relationship on economics and cultural areas. After all, elites in Riyadh are spreading Salafi thought patterns far and wide and these ideals are not only anti-democratic and anti non-Muslim; but they are also anti-Sunni Muslim in relation to diversity within this branch of Islam. In other words, Egypt must balance many complex issues and this equally applies to Gaza and relations with Israel.
El-Sisi knows full well that internal and external enemies seek economic chaos and poverty. Also, mass demonstrations threaten to destabilize Egypt and unnerve the business community. Therefore, certain curbs are needed to protect Egypt from a spiral of chaos because most nationals in all nations are more concerned about “bread and butter issues.” Of course, most Egyptians want a flourishing democratic state in the long-term once stability returns to this nation. However, important steps are needed in order to reach this final destination and El-Sisi is well aware of this.
Prior to the referendum on the amended constitution El-Sisi commented that the result would “correct the democratic path and build a democratic modern state that satisfies all Egyptians.”
Of course, many politicians in Egypt want to protect the nation state from the tentacles of the Muslim Brotherhood and external forces. At the same time, they don’t want to return to the Mubarak era. However, to“to build a democratic modern state” given the perilous situation in Egypt then a strong unifier is needed. Within Egypt one unifier stands out and this applies to El-Sisi because the nation state is threatened by internal and external factors that seek to sow the seeds of discord.
Therefore, while the road ahead remains rocky it is obvious that if El-Sisi and the army had not considered the “will of the masses;” then today the Muslim Brotherhood would be turning the clock back. Not only this, the indigenous Coptic Christians of Egypt would have been crushed in time. Likewise, the minority Shia would have felt the full force of Islamist indoctrination and mainstream Sunni religious leaders would have been usurped by the Islamist totalitarian theocratic agenda. Similarly, women would have been forced into the shadows and gradually the political left and liberals would have been swept up aka Iran style. After all, the Muslim Brotherhood agenda is widely known even if the Western media and elites in Washington and London want to hide this. Given this reality, then the bravery of the Egyptian masses and powerful individuals like El-Sisi stood up against both internal and external enemies. Now, therefore, it is time to start the next stage that was summed up perfectly by El-Sisi because he stated now is the time to “correct the democratic path.”
leejay@moderntokyotimes.com
http://moderntokyotimes.com