Iraq Blames Qatar and Saudi Arabia for Terrorism: Re-run of Afghanistan and Pakistan. By Salma Sribi and Michiyo Tanabe 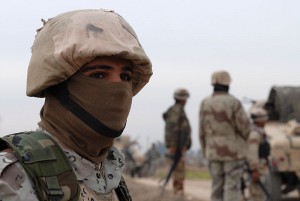 Prime Minister Nouri Maliki of Iraq denounces Qatar and Saudi Arabia for supporting terrorism and sectarianism against Iraq. Maliki made it abundantly clear that Qatar and Saudi Arabia are involved in the destabilization of Iraq based on Gulf petrodollars, their geopolitical ambitions, sectarian factors and other negative realities. Of course, this highlights the sham of Saudi Arabia that often claims it is fighting terrorism but in reality this nation turns this clock on and off when it suits the elites in Riyadh.
Indeed, the only real fear for Saudi Arabia and other Gulf states is to keep internal terrorism at bay. Therefore, exporting terrorism and spreading sectarianism is the mantra. Of course, major Western powers also conveniently use terrorism and sectarianism when the time suits. This reality applies to fighting on the same side in Afghanistan (1980s/1990s); Bosnia; Libya and currently in Syria. However, it is Gulf petrodollars, Salafi ideology, exporting militancy and funding sectarian ventures based on the intrigues of feudal kingdoms, where all the barbaric synergy comes together.
Maliki spoke frankly to France 24 about Qatar and Saudi Arabia supporting the brutal terrorist and sectarian insurgency in Iraq. Maliki says: “I accuse them of inciting and encouraging the terrorist movements. I accuse them of supporting them politically and in the media, of supporting them with money and by buying weapons for them…I accuse them of leading an open war against the Iraqi government.”
Lee Jay Walker at Modern Tokyo Times says: “This reality is like a re-run because in Afghanistan it is clear that Pakistan is involved in many murky terrorist and sectarian dealings against this nation. In other words, the allies of America and the United Kingdom are the same nations assisting terrorism against governments and nations they are meant to be supporting. Of course, this equally entails that many British and American soldiers have been killed and maimed because of the collective intrigues of so called allies. Despite this, what is the comeback against Pakistan, Qatar and Saudi Arabia?”
President Hamid Karzai of Afghanistan is saying the same with regards to Pakistan destabilizing his country. The New York Times reports “Mr. Karzai charged that elements of the Pakistani government were still supporting Islamic militants, as they had in the past, and that if such sources of terrorism were not defeated, Afghans and international soldiers would continue to die.”
The above was stated in 2006 yet in 2011 Karzai made it clear that nothing had changed. In the Washington Post they quote Karzai saying: “Pakistan has pursued a double game toward Afghanistan, and using terrorism as a means continues.” Of course, in 2014 this same opinion is held by many in Afghanistan but at no time is Pakistan worried about becoming a pariah – just like Qatar and Saudi Arabia don’t have to worry. Therefore, what is going on in the corridors of power in Washington and London?
While Maliki was accusing Qatar and Saudi Arabia yet another barbaric terrorist attack killed over 30 Iraqi nationals. The latest terrorist attack took place at a checkpoint in Hilla. Like usual, Sunni Islamic jihadists attacked Hilla because this area is predominantly Shia and Takfiri hatred towards this community knows no boundaries.
France 24 reports: “Maliki went on to say that not only did Saudi Arabia support terrorism in countries such as Iraq and Syria, but around the world.”
Lee Jay Walker says: “Afghanistan and Iraq are paying a heavy price because of the respective intrigues of Qatar, Pakistan, and Saudi Arabia. India knows full well that being the largest democracy in the world doesn’t appear to resonate in London and Washington. After all, for decades Pakistan is exporting terrorism to Kashmir and many brutal terrorist attacks in India can be traced back to Pakistan. Yet, despite this reality, and the obvious connection linking Pakistan with many terrorist and sectarian factions in Afghanistan, this still doesn’t prevent America and the United Kingdom from supporting Pakistan in the field of economic and military support. Indeed, it appears that just like American and British soldiers are expendable to political elites in Washington and London; the same can clearly be said about Pakistan soldiers being killed based on the intrigues of Pakistan.”
In 2013 just below 9,000 people were killed in Iraq because of sectarian and terrorist forces. This figure is the highest since 2007 and says much about the bankruptcy of President Obama in America. Indeed, France 24 should be asking why France is involving itself along with Turkey against the government of Syria. After all, like Maliki says about Qatar and Saudi Arabia: “They are attacking Iraq through Syria, and in a direct way.”
Until Gulf and Western powers are held accountable then sadly the destabilization of nations will continue whereby terrorism is a useful tool. Obviously, this reality is being ignored by the United Nations therefore the same methodology will continue to be utilized by the same Gulf and Western powers – along with Turkey and Pakistan that continue to switch the terrorist clock on.
Lee Jay Walker gave guidance to both writers
http://www.france24.com/en/20140308-france24-exclusive-interview-iraq-maliki/
http://www.bbc.com/news/world-middle-east-26501610
http://www.nytimes.com/2006/12/13/world/asia/13afghan.html?_r=0
leejay@moderntokyotimes.com
http://moderntokyotimes