Threats – a juvenile prank or serious issue. By Shamim Masih 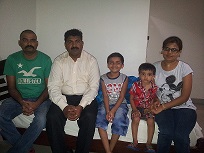 Religious persecution is not the only reason which compels Pakistanis to seek asylum elsewhere. Many a time, Pakistanis are forced to flee from their country because of their affiliation or lack of the same thoughts. I always wonder was the country made only for single Muslim school of thought, who always attack on other faiths and threaten them to leave the country. No not, Pakistan is just as much a home to Christians, Hindus, Ahmadis and Shias and nobody has right to expel anyone from their homeland. However, expulsion continues to take place on gun point and many a time over the lifeless bodies of loved ones. Infect we always think that misfortune always falls on other people and somehow we always stay away from such things until the violence strikes at our home.
I see many Pakistanis are seeking asylum in foreign countries and most of them instigate violence themselves and ignite the fury of others so that they can seek political or religious asylum in foreign countries. Many Christian families are living in UK, USA, Canada and other European countries. Seeking asylum is not easy and people who say that people do it deliberately should go to see, where many asylum seekers from different countries work day in and day out to feed their families. Seeing their faces will make you understand that what they have chosen has been the lesser of two evils as a last resort.
According to the sources, around 8000 families are seeking asylum in Thailand, Srilanka, and Malaysia. Most of the asylum seekers who leave Pakistan in hopes of a better and safer future reached destitute or have meager funds which only last for a very small period of time. Most of them have to accept odd jobs and work at less than minimum wage until their resident status is approved by the immigration authorities. But I don’t see any positive response from the authorities or UNHCR. Colombo Gazette reported that there are around 600 Pakistani Christians are currently seeking asylum in Sri Lanka.
Many of the families have sold their houses and lost their job in hopes of a better and safer future, told Basharat Khokher after his visit to Thailand, Sri Lanka and Malaysia. According to Basharat Khokhar some Human Right Champions are involved in human trafficking on the name of asylum in different countries. He condemn this act of Human Right Organization instead being supportive they are playing with their future. He said he met with many families there and now some of them are backing to rejoin their jobs, realizing the situation and bleak future.
He mentioned Pakistan European Christian Association – PECA and few others, I tried to call on the given number and have left massage but there is no response so far.
Nazir S Bhatti, President Pakistan Christian Congress – PCC have expressed his concern over the unprecedented delay shown by UNHCR offices in Sri Lanka, Malaysia and Thailand in processing applications for thousands of Pakistani Christian asylum seekers. The PCC chief appealed to UN secretary general Ban Ki Moon that cases of the Pakistani Christians in these countries be considered on a priority bases for refugee status. He said they are living in miserable human conditions for years and have been waiting for their applications to be considered.
Refugees have no right to work legally, and it is difficult to find employment, even in the informal sector. Most urban refugees in Thailand live a precarious existence: unable to work, often unable to send their children to school, they are typically financially stressed, dependent on ad-hoc charity to survive, at risk of exploitation and constantly worried about being arrested and indefinitely detained. Most of them reached there with a genuine passport and tourist visa. They are usually exhausted most of their savings to come to Thailand. Once their tourist visas expire, under Thai law, they are considered illegal migrants. As a result, they are at constant risk of arrest and extort refugees and then release them, but arrest can also result in indefinite detention. Pakistani Christians often face harassment and discrimination in churches from the Thai community. Many were unaware how difficult conditions would be in Thailand before they came, often having been misled by “agents or people-smugglers.”
Even if refugees obtain refugee status, their chances of being resettled outside of Thailand are not high, and they face serious ongoing protection problems while they remain in Thailand.
I left their shops and homes with a very heavy heart, fervently praying that Pakistan would once again become a tolerant and progressive society where people can enjoy equal rights.