Syria Needs Strengthening in Order to Strike ISIS: Iraq and US Schizophrenia. By Jibril Khoury and Lee Jay Walker 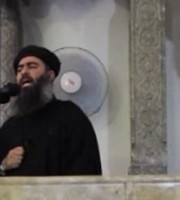