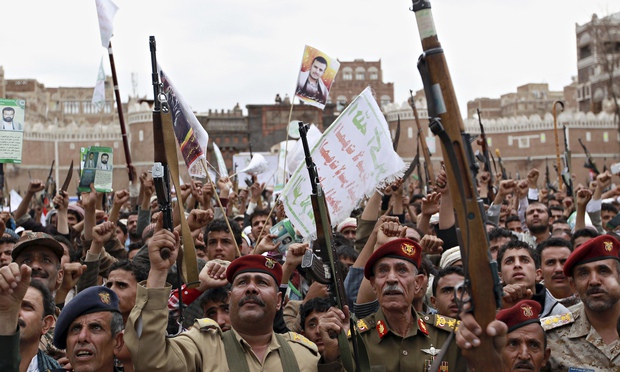 Saudi Arabia and allies of this nation are pulverizing Yemen to pieces on a daily basis. Indeed, nothing is sacred because mosques, hospitals, schools, food centers and the entire infrastructure are being targeted. All this is happening with little concern being shown by America, France and the United Kingdom towards the anti-Shia sectarian policies of Saudi Arabia.
Medecins Sans Frontieres (MSF – Doctors Without Borders) knows full well about the utter waywardness of the Saudi Arabia led bombing campaign. After all, in recent days this external force – that is seeking to impose its political ambitions on Yemen – bombed a hospital that is being assisted by MSF.
The hospital in the Razeh District was brazenly attacked despite all sides knowing the reality of the Shiara hospital. Sadly, for the people of Yemen they know full well that the international community is giving Saudi Arabia – and Sunni Muslim dominated nations within the Riyadh coalition – a free hand to destroy an extremely poor nation. This is being done based on the sectarian whims of the feudal monarchy of Saudi Arabia.
Once more major Western powers are enabling the sectarian and backward nature of Saudi Arabia to sow the seeds of anti-Shia hatred. Indeed, major Western powers know full well that Islamist Takfiri ideology is spreading throughout parts of Europe based on Gulf petrodollars and enormous Salafi indoctrination. Therefore, political elites in America, France and the United Kingdom should be ashamed of internal and external policies that are creating mayhem.
MSF commented about the latest attack against a hospital by the Saudi Arabia led coalition by reporting “All warring parties, including the Saudi-led coalition (SLC), are regularly informed of the GPS coordinates of the medical sites where MSF works and we are in constant dialogue with them to ensure that they understand the severity of the humanitarian consequences of the conflict and the need to respect the provision of medical services…. There is no way that anyone with the capacity to carry out an airstrike or launch a rocket would not have known that the Shiara hospital was a functioning health facility providing critical services and supported by MSF.”
In a past article by Modern Tokyo Times it was stated: “The tripartite sectarian nature of ISIS (Islamic State), Al-Qaeda in the Arabian Peninsula (AQAP), and the Saudi Arabia led coalition, is in full swing and aimed at crushing the Shia Houthis. At the same time, Sunni loyalists who oppose being pawns of Saudi Arabia are in the firing line in this nation. After all, given the nature of ISIS, AQAP and Saudi Arabia, then radical clerics will be on the frontline in deeming all and sundry with being apostates. However, the real targets of AQAP, ISIS and Saudi Arabia are the Shia Houthis and other forces that oppose the Riyadh diktat. Therefore, the sectarian nature of Saudi Arabia and fellow Sunni Muslim allies involved in bombing Yemen is abundantly clear.”
In the past the United Nations (UN), just like MSF, equally condemned the Saudi Arabia led coalition. However, despite this, and the fact that ISIS and AQAP are gaining from all the bloodshed and mayhem, major nations including America, France and the United Kingdom are assisting Saudi Arabia in many military ways.
The UN Humanitarian Coordinator for Yemen, Johannes Van Der Kaauw, reported last year “I strongly urge the coalition to stop targeting Sanaa international airport and to preserve this important lifeline – and all other airports and seaports – so that humanitarians can reach all those affected by the armed conflict in Yemen.”
Sadly, for the people of Yemen it appears that they have been abandoned therefore the brutal bombing of this nation by Saudi Arabia will continue. In other words, more hospitals, mosques, food centers, schools – and the entire infrastructure – will continue to be pulverized by the Saudi Arabia led coalition.
http://www.msf.org/article/yemen-another-msf-supported-hospital-bombed
http://www.dw.com/en/un-condemns-saudi-attacks-on-yemen/a-18428486
http://moderntokyotimes.com Modern Tokyo Times – International News and Japan News