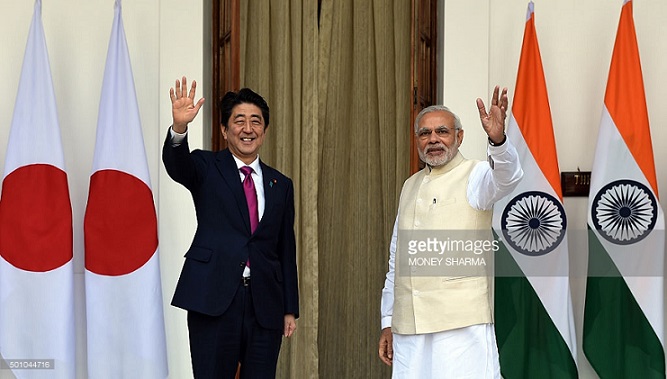 The Prime Minister of Japan Mr. Shinzo Abe visited India last December to participate in the annual bilateral meeting with the Prime Minister of India.
The peoples of India and Japan are guided by common cultural traditions including the heritage of Buddhism, and share a commitment to the ideals of democracy, pluralism and open society. India and Japan, two of the largest and oldest democracies in Asia display a high degree of congruence of political, economic and strategic interests and view each other as partners capable of responding to global and regional challenges. Both countries take a long term strategic view of their relations.
There is admiration for Japan’s post war economic reconstruction and rapid growth. Its emergence as a major power is often understood in India as the beginning of the Asian resurgence. Japan is consistently ranked as the most admired nation in our media polls.
India and Japan established diplomatic ties in 1952 and the relations were upbeat. However, the momentum was not maintained. When Prime Minister Rajiv Gandhi visited Tokyo in 1988, it was after a gap of 20 years since the last high level visit from India. The links between the two countries were then revitalised for a number of reasons. Firstly, India’s economic reforms and integration into the global economy made restoration of ties with the Asia-Pacific region a natural consequence. Secondly, India’s “Look East” policy entered a more dynamic and vibrant phase with Japan as a key partner in East Asia. Thirdly, there are growing economic complementaries and political convergences and the relationship between the two Asian countries has a legacy of goodwill.
As per a survey conducted by the Japan External Trade Organisation (JETRO) India is the second most preferred destination abroad next to China for Japanese business. The entry of Suzuki in India was epoch making and a great success story bringing the automobile revolution to this country.
Prime Minister Dr. Manmohan Singh visited Japan in December 2006. The Joint statement signed during this visit established the India-Japan Strategic and Global Partnership. This Partnership is based on five pillars of cooperation, viz. political, defence and security, comprehensive economic partnership and the science and technology initiative. It provides a vision for charting the future course of action as well as a detailed action plan.
At the Summit meeting held last December, the two Prime Ministers acknowledged the importance of cooperation in the education sector, welcomed the institutionalised exchange of doctoral and post-doctoral research students and encouraged movement of professors and faculty between India and Japan The two Prime Ministers advised their universities and academic institutions to further expand cooperation. Prime Minister Abe hoped that in the next five years, 10,000 young Indians would be visiting Japan under such frameworks as students exchange, IT training and short term exchanges, and hoped that this would provide a solid bond for our future relations. The invitation to approximately 120 persons from India through the Japan-East Asia Network of Exchange for Students and Youths (JENESYS) 2015 programme is another instance of broadened exchanges.
In view of the potential and the immense opportunities in the tourism sector, the two sides shared the intention to convene the first meeting of the Joint Working Group on Tourism at an early date in Japan. Recognising the importance of facilitating exchanges between people of the two countries, both leaders stressed the importance of further simplifying the visa procedures for nationals of each other. From January 2016, the Japanese side will relax visa requirements together with extension of visa validity and period of stay for temporary visitors. The Japanese Government also decided to extend the validity of multiple visas up to 10 years for temporary business purposes.
The two Prime Ministers reaffirmed their intention to work together for the early realisation of U.N. reforms, particularly the Security Council reform, so as to better reflect the realities of the international community in the 21st century. They welcomed the recent developments in the Inter-Governmental Negotiation process towards the launch of text-based negotiations, and reaffirmed their determination to redouble their efforts towards achieving a concrete outcome. The two Prime Ministers reiterated their support for each other's candidature, based on the firmly shared recognition that India and Japan are legitimate candidates for permanent membership of an expanded Security Council.
The victors of World War II shaped the United Nations Charter in their own national interests allocating the permanent seats and associating the veto power among themselves. Presently, the United Nations with 993 members is vastly different from what it was at its founding with only 51 members. The realisation of the objectives enshrined in the Charter of the United Nations requires a transformation of the Security Council so that it reflects today’s geopolitical realities. Yet, any amendment to the present Charter requires the vote of two thirds of the members of the U.N. including all the permanent members of the Security Council. China, Russia and the United States are permanent members of the Security Council and they may attempt to delay indefinitely the process of reform.
Last August marked the 70th anniversary of the atomic bombings of Hiroshima and Nagasaki. The two Prime Ministers reaffirmed their shared commitment to total elimination of nuclear weapons. They called for immediate commencement and early conclusion of negotiations on a non-discriminatory, multilateral and internationally verifiable Fissile Material Cut-off Treaty on the basis of the Shannon Mandate. Prime Minister Abe stressed the importance of an early entry into force of the Comprehensive Nuclear Test Ban Treaty which should lead to total and global nuclear disarmament. They also supported the strengthening of international cooperation to address the challenges of nuclear proliferation and nuclear violence.
Prime Minister Abe thanked the Government and the people of India for their warm hospitality and extended an invitation to Prime Minister Modi to visit Japan at a mutually convenient time for the next annual summit meeting. The dates of the meeting will be decided through diplomatic channels.
(The writer is a former Union Minister)