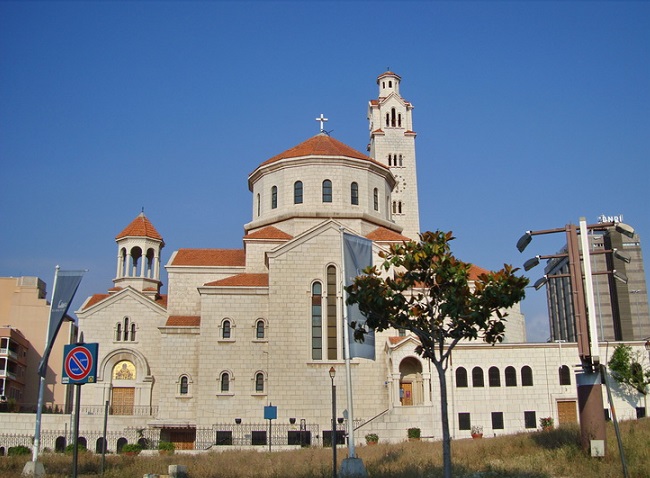 In the 1920s, the young Lebanese artist Georges Dawud Qurm developed a restrained art that held up the countryside of Lebanon, and facial types of its people, to a new generation that wanted some sort of identity as France clamped down its mandatory rule that might deculturize. Born in 1896, Qurm studied painting at the Ecole National Superieuse des Beaux-Arts in Paris from 1919-1921. In Paris, he met Maronite Patriarch Ilyas al-Huwayyik who had come to lobby for a Greater Lebanon state (which would be small even when expanded) at the Peace Conference, and to French officials who were not quite certain about such a state-entity. Qurm voiced love of al-Huwayyik’s august personality. Georges Qurm became active in the construction of the institutions that would mould Lebanese nationalist culture and thought: the coming Museum of Antiquities and Beaux-Arts of Bayrut, the jury for the selection of the Lebanese national anthem, and the Lebanese National Conservatory of Music; he was secretary of the International Archeological Congress held in Bayrut in 1926 at a turning point towards deeper particularization. The great impact of visual art and objects from Lebanese antiquity as the West dug up and studied them came, though, in the 1930s and 1940s. But Georges Qurm was among those already laying bases for that neo-pagan nationalism in the early 1920s.
Deepening Grand Liban in the minds of the educated, Qurm painted some modern and traditional buildings set in its irregular green and jagged mountains. Such Grand Liban natural scenery as the bay of Juniyah and the stalactites of the underground caves of Jaytah, continued to flow from his brush into the 1950s.
Ethel 'Adnan argued that Qurm’s “placing Man at the summit” was nourished by a religion set in a special place --– that since his childhood as the son of the Lebanon Jabal Mountains a Christian impulse had further pointed Qurm to focus humans as well as a Land. His was the Christian point of view typical of the Jabal, argued 'Adnan
However, Qurm migrated to Egypt in 1928. His scenes of Egyptian daily life carry forward his concern for humans. Along with his Lebanon canvases, his portraits of Arab leaders such as Ibn Sa‘ud together may have helped set the scene for the emergence of Egypt’s pan-Arab nationalism in the 1930s. As a portrait-painter with too few commissions during the Great Depression, a canvas by Qurm caught hard labor among ship-haulers in Egypt. But he was to assail Communism in the 1950s.
In the 1920s, though, Qurm’s unbroken stream of canvasses of the fluid Lebanese countryside were delivering a particularist homeland to the Lebanese: pine trees, sea-scapes, the sharpely-turning, narrow roads of those Mountains, the plunging deep valleys with their villages of that massive Jabal, all the subtle colors of the sea, and the sands and rocks of its shore-line into which Bayrut abuts. The concern with Mount Lebanon and its littoral were carried forward by the artists Saliba Duwayhi, 'Umar Urisi and Georges Cyr.
The data in this section suggested that there was among Maronites a long-standing sense of Moutain Lebanon, the Jabal Lubnan, and often littoral Bayrut, as making up a homeland that needed some degree of political self-expression. Sa’adeh in 1920 implicitly agreed that Lebanon as a place-unit had achieved many modern things, which he wanted to get for all Syria. Yet this “Watan” homeland was small even when adjoining non-Maronite areas were added to it in the 1920 Grand Liban --- so did Lebanon have enough weight and substance to it to sustain a polity that would be truly independent and self-directing? As a forming pan-Syrian, the teenage Ntun Sa’adeh, born in Lebanon, held up a known and clearly-defined wider Syria homeland that had the extent and resources to support sovereignty able to defend itself when needed. It is clear that many Maronites were swinging in 1918-1922, and were themselves aware of the objections to the Lebanon national project, countered by his advocacy of a pan-Syrian state, that Sa’adeh raised