Alawites Massacred in al-Zara by Sunni Takfiris: Alawites to the grave, Christians to Beirut. By Murad Makhmudov, Noriko Watanabe, and Lee Jay Walker 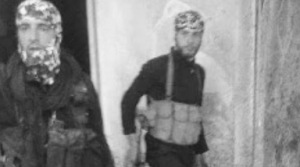 Sunni Islamist Takfiris from Ahrar al-Sham and al-Nusra overran a mainly Alawite village in central Syria several days ago. Since then, reports stress that many Alawite civilians have been butchered. Equally disturbing, many civilians from the village of al-Zara are missing and presumed either dead or kidnapped. Therefore, the death toll is likely to increase given the brutal nature of Sunni Takfiris.
Contrary to the mantra of many Gulf and Western media outlets, this was the aim of Sunni Islamists from day one. After all, the slogan “Alawites to the grave, Christians to Beirut” is the objective of various Sunni Islamist sectarian forces in Syria. Given this reality, the latest brutal attack against mainly Alawite civilians, along with the cleansing of Christians and other minorities throughout Syria, is a continuation of what opposition Sunni Takfiris have been doing since outside nations began to meddle into the internal affairs of this nation.
Associated Press reports “Al-Qaida fighters and other ultraconservative Sunni insurgents seized a predominantly Alawite village in central Syria on Thursday, sparking fears of sectarian violence as families from the village were reported missing by activists.”
Reuters also highlights the grim attack by reporting, “Syrian state television broadcast interviews with men and children who had fled the attack. They said rebels killed women, children and elderly people, slaughtered livestock and destroyed houses as they attacked.”
Irrespective of the various motives of nations including America, France, Qatar, Saudi Arabia, Turkey, and the United Kingdom, it is abundantly clear that they have conspired to fuel “Alawites to the grave, Christians to Beirut.” Indeed, for religious minorities in Iraq, whereby Yazidis are being enslaved by ISIS (Islamic State) and the majority of Christians have fled since America and various allies intervened in this nation, the mirror of Gulf and Western intrigues is all too familiar. Similarly, Shia Muslims are slaughtered daily in Iraq and the small community of the same faith group is targeted in Syria by various Sunni Islamist Takfiri groups.
The latest massacre against innocent Alawite civilians in Syria is a grim reminder of what Sunni Takfiri Islamists are all about. This applies to religious cleansing, butchering and enslaving different faith groups throughout the region. Therefore, Alawites (Syria), Christians (Iraq and Syria), the Druze (Syria), Shabaks (Iraq), Yazidis (Iraq) and the Shia (Iraq and Syria) are all threatened by an array of Sunni Islamist Takfiri groups that have been emboldened by the intrigues of various Gulf and NATO powers.
Similarly, Sunni Muslims that either support central forces or who remain neutral, also face the same Sunni Takfiri sword. Given this reality, many Sunni Muslim clerics have also been killed because they supported the mosaic of both nations. Indeed, the brave Sunni Muslim Grand Mufti of Syria would face certain death if he became captured by an array of Sunni Islamist Takfiri groups. This is based on his brave stance in supporting Syria for all faiths. Likewise, some of the worse massacres by ISIS in Iraq and Syria are aimed at the mainly Sunni Kurds who are deemed apostates by Sunni Takfiris.
However, for Alawites and Christians in Syria the mantra from day one of “Alawites to the grave, Christians to Beirut” continues. Therefore, the latest massacre of Alawites by Sunni Islamist Takfiris is a disturbing reality. After all, this fate awaits all minority faith groups in Syria if central forces are defeated.
http://uk.reuters.com/article/uk-mideast-crisis-syria-village-idUKKCN0Y41MJ
http://www.nytimes.com/aponline/2016/05/12/world/middleeast/ap-ml-syria.html?_r=0
http://moderntokyotimes.com Modern Tokyo Times – International News and Japan News