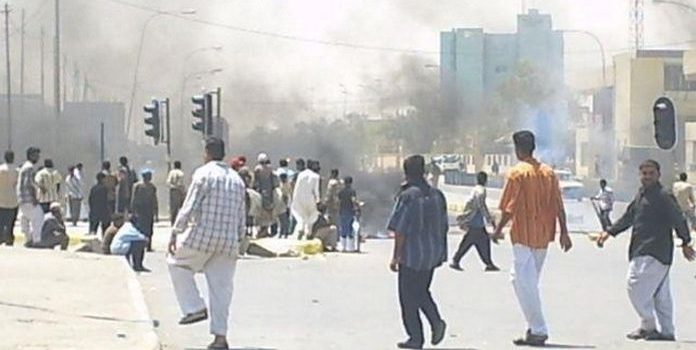 In the last two weeks, hundreds of mainly Shia Muslims have been killed in the capital of Iraq by brutal Sunni Takfiris. This applies to many different sectarian terrorist attacks by ISIS (Islamic State – IS) in Baghdad. The common theme is the targeting of predominantly Shia Muslim areas throughout various parts of the capital. Therefore, given the delicate political situation in Iraq, it is clear that further strains will emerge because people feel abandoned by the central government.
Yesterday several bombings hit an already devastated Baghdad with the upshot being the deaths of over 65 people. Sadly, with over 100 people being injured then the death toll will most likely rise.
Voice of America reports “The deadliest attack occurred in the mainly Shiite district of al-Shaab area in northern Baghdad, where officials say a suicide bomber detonated explosives in a busy market. So-called Islamic State group has claimed responsibility for the attack which left at least 34 people dead and wounded at least 70.”
In a similar vein, France 24 (with AP, AFP, and Reuters) reports “Commercial and public places in Shiite-dominated areas are among the most frequent targets for the Sunni militants seeking to undermine the Iraqi government efforts to maintain security inside the capital.”
The Shia holy cleric Sayyid Muqtada al-Sadr is extremely disturbed by the utter failure of the government of Iraq to root out corruption. After all, al-Sadr knows full well that the masses feel abandoned. Therefore, al-Sadr seeks to tackle political cronyism, the endless cycle of terrorism, the weakening of the nation-state, issues related to corruption, poverty, limited chances of opportunities, a fragile infrastructure, political inertia – and other major issues.
Recently al-Sadr said, “I make a historical call to every honest, reform-loving Iraqi to rise up and start a new phase in the peaceful popular protests.”
Earlier al-Sadr had told his followers to “Get ready and organize yourselves to establish sit-in tents. This is your time to root out corruption and the corrupt.”
The current upsurge in bloodshed in Baghdad by ISIS will further put strains on the current government. In other words, it is al-Sadr who is standing up for the Shia and other Iraqi nationals who feel abandoned and at the mercy of terrorists. Given this reality, it is time for a fresh approach in Iraq and to root out endless self-interests.
If the central government refuses to listen to holy Shia clerics like al-Sadr, then the situation will continue to deteriorate.
Al-Sadr sincerely stated, “I am among you to say to you, frankly and bravely, that the government has left its people struggling against death, fear, hunger, unemployment, occupation, a struggling economy, a security crisis, bad services and a big political crisis.”
http://www.voanews.com/content/bombings-kill-18-in-baghdad/3333604.html
http://www.france24.com/en/20160517-baghdad-scores-killed-suicide-bombings-attacks-shiite-neighbourhoods
http://moderntokyotimes.com Modern Tokyo Times – International News and Japan News