Shias are worst victims of state repression in Pakistan. By Allabaksh 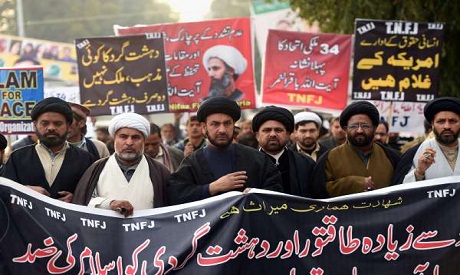 It is difficult to believe but true that Pakistan, a country created for Muslims, for Sunnis and Shias alike, has today become a nightmare for millions of Shias living there. A well-known writer and a member of the famous political family in Pakistan, Fatima Bhutto, said the country had become a ``country of ghosts`` for minorities, especially for Shias.
Pakistan is home to 40 million Shias, the second largest concentration after Iran. Most of them have been living in their traditional home even before the Partition. But they have been facing systematic discrimination and repression a few years after the creation of Pakistan.
A sub-sect of the Shias, Ahmadis, were the first ones to be targeted. Merely six years after Pakistan was created, Sunnis under state patronage began first intimidating and then openly attacking Ahmadis and their religious places. The violence unleashed by the Sunnis, supported by the state political and military leadership, culminated in widespread riots and arson in Lahore. The Ahmadis since then have been officially marginalised, prohibited from visiting mosques, offering prayers in public and discriminated in all possible spheres of life.
The targeting of Ahmadis was a long-term project of the state to divide the Shias and then destroy their faith, inch by inch. The process got a decisive boost when military dictator Zia-ul Haq took reins of power and began converting Pakistan into a fundamentalist Sunni state, a U-turn from what the country’s founding fathers had conceived. Zia’s fundamentalist plan however misfired when Shias and others strongly protested and came out into the streets. It was a threat which Zia did not forgive. And that was the beginning of the tragedy of Shias.
To teach the Shias a lesson, for challenging his authority, Zia sponsored a rabidly anti-Shia Sunni group called Anjuman Sipah-e-Sahaba Pakistan which later on spawned an armed extremist group known as Lashkar-e-Jhangvi (LeJ). This armed group, with a stated agenda of targeting Shias, became the recruitment agency for terrorist groups like al Qaeda, the Taliban, LeT, JeM and various other extremist groups based in Pakistan and Afghanistan.
The Zia-created anti-Shias indulged in targeted killings of Shia professionals with immunity in all major cities across Pakistan. The Sunni group became so powerful that its leaders were courted by the political leaders of all parties and the military and police were wary of their close relationship with terrorist groups which also targeted Pakistan at times.
Fatima Bhutto is not the first writer to raise the state repression of Shias in Pakistan. Other writers and journalists have done it in the past, and many were in turn punished by the state and its proxy anti-Shia groups like SSP and LeJ.
Incidentally, Fatima Bhutto’s cry coincides with a report on the state of religious minorities in Pakistan published by a highly respected think tank in Islamabad, the Jinnah Institute. The institute is run by an equally well known writer and political leader, Sherry Rehman.
In a May 2016 report, the institute pointed out that Shia muslims in the country have been victims of rising levels of violence in the recent past. The report puts the number of Shias killed in various violent acts to be over 1900 between 2012 and 2015.
To quote the report: “There has been an upsurge in attacks against Shia Muslims in Peshawar, Rawalpindi and southern Punjab...The Shia Muslims have been …. besieged for a very long time as violence has grown in some parts of Pakistan, particularly in Quetta, Karachi and north of the country...
Pakistan is a scene of war and violence for a very long time and it is no surprise anymore that there are militant groups now operating here.
The report pointed out that Shias, among other minorities, have been the victims of gravest religious violence in Pakistan in the last three years. In this period, there have been at least 23 targeted attacks on religious places of Shias and over 200 targeted killings of Shias in the country. These killings and attacks have been most in Punjab and Sindh but have also been reported from other provinces.
In Balochistan, anti-Shia messaging in public space has been on the rise. In Khyber Pakthunkhwa, violence is driving Shias out of the province to safer areas. The most serious attack on Shias took place in May 2015 in Karachi when assailants sprayed bullets on a bus packed with Shias and other minorities.
Fatima Bhutto’s observations are relevant at this point to underline the severity of the problem. Writing in an newspaper, she pointed out that “Seventy per cent of Pakistan’s Muslims are Sunni. And in this predominantly Muslim country, it is no longer Hindus or Christians who face the largest threat of violence from orthodox and radicalised groups but Shias...Are you Hazara? Are you Shia? Are you an Ahmadi? Any of the above will get you killed.”