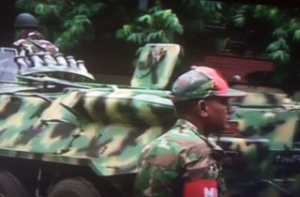 Sunni Islamists are butchering innocents in countless nations and the atmosphere is now turning dark in modern day Bangladesh. After all, in recent times bloggers, Buddhists, Christians, Hindus, Secularists, writers, and anyone deemed un-Islamic, have been targeted. Of course, in the mindset of Sunni Takfiris then minority Muslim sects including the Ahmadiyya and Shia face the wrath of these sectarian terrorists. Therefore, the singling out of non-Muslims for slaughter in the capital of Bangladesh resembles the systematic targeting of Christians in Kenya and the butchering of Shia Muslims in several nations at the hands of Sunni Takfiris.
According to initial reports, 20 people were killed in a well-known restaurant in Dhaka after armed Sunni Islamists stormed this place. A state of panic ensued and hostages were taken. Immediately non-Muslims feared the worse because Muslims became separated from the future slaughter.
Associated Press (France 24) reports “The attack marks an escalation in the growing drumbeat of militant violence to hit the traditionally moderate Muslim-majority nation in the past three years, but with increasing frequency in recent months. Most attacks have been by machete-wielding men singling out individual activists, foreigners and religious minorities.”
The Long War Journal also reports on the tragedy and says “The Islamic State fighters are said to have shouted “Allahu Akbar,” or “god is greatest,” during the initial assault, divided Muslim customers from non-Muslims, and then brutally executed the non-Muslims, some with knives and machetes.”
One can only imagine the last moments of people singled out for slaughter and the fear that engulfed them. After all, it is known that Sunni Islamists behead and chop people up based on the blood lust that unifies these brutal Sunni Takfiris. This sad reality applies to various Takfiri and sectarian groups that are killing in many nations.
It is known that 9 Italian citizens and seven Japanese nationals were killed after being singled out for slaughter. However, while the brutal Sunni Islamist attack is upping the ante in terms of numbers killed in Bangladesh, the warning signs were obvious. This applies to the hacking to death of individuals that are deemed to be enemies of Islam. Therefore, in recent times a Buddhist priest was hacked to death, Christians targeted, Hindus killed – and bloggers and writers reside in fear because many have been killed in brutal ways.
The Prime Minister of Japan, Shinzo Abe, said “A large number of lives have been lost to a despicable act of terrorism. I offer my heartfelt prayers for the repose of the souls of those who lost their lives to this act of terrorism and also extend my condolences.”
Abe continued by stating “Many innocent people have lost their lives to this cruel and atrocious act of terrorism. I am intensely outraged. Sheikh Hasina, the Prime Minister of Bangladesh, condemned the brutal terrorist attack and vowed to tackle the growing menace. Yet, for some, her response to bloggers and writers who were hacked to death previously was simply not good enough. Given this reality, it is essential that political elites wake up to the growing danger of Sunni Islamists that seek to target all and sundry in Bangladesh.
http://japan.kantei.go.jp/97_abe/statement/201607/02.html
http://www.france24.com/en/20160702-six-gunmen-killed-13-hostages-rescued-bangladesh-hostage-crisis
http://www.reuters.com/article/us-bangladesh-attack-idUSKCN0ZH5HE
http://moderntokyotimes.com Modern Tokyo Times – International News and Japan News