Imposter Pathan PM has a Pathan problem. By Farooq Ganderbali 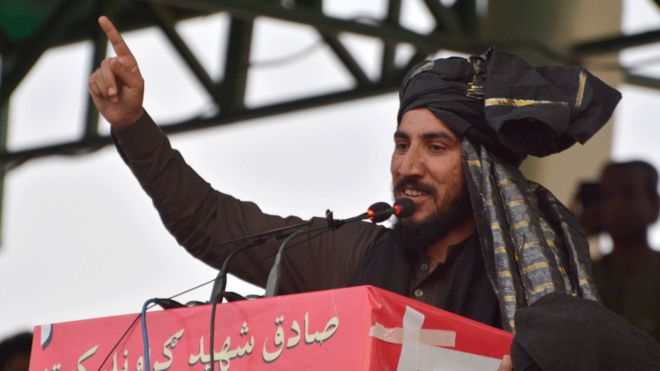 Prime Minister Imran Khan, a Pathan himself, will face one of the biggest challenges in dealing with the rising anger of his community, most of which is targeted at Khan's patrons, Pakistan Army.
The Pashtun community in Pakistan, especially those living in the frontier areas of Khyber Pakhtunkhwa and the tribal areas, have been up in arms over the callous and cruel manner in which their own security forces have been treating them for over a decade now. Ever since, Pakistan had decided to join the US-led `war on terror`, the Army had waged a war against its own Pakthun people---killing thousands of them, driving several thousands from their homes, razing their towns and villages and, above all, labelling them as ``anti-nationals``.
The proud Pashtuns, despite bearing humiliation and cruelty of its own army for years, kept quiet, living pitiable lives in pathetic refugee camps in strange towns or forced to live in urban slums in big cities like Karachi and Peshawar. Their homes and towns today resemble ghost towns. There is no news of their kith and kin who went `missing` every time the Pakistan Army launched a new operation against `terrorists` sheltered in the Pashtun territory.
These operations were the biggest fraud played on the Pashtun people. While real terrorists like the Haqqani Network leadership, al Qaeda and the Taliban remained untouched, combat jets, artillery guns and columns of armed infantry targeted innocent Pakthun tribesmen. The army was quick to broadcast their `kills` but chose to identify those who were labelled as `terrorists`. The ruse worked initially till the people realised that the army was blindly killing innocent men, women and children under the garb of anti-terrorist operations.
There was a blanket ban on journalists visiting the `war field`. But even if the journalists could go, there were hardly anyone who would---the silence of the media was overwhelming. The majority were `persuaded` to keep quiet. Many of them were `encouraged` to report false and fake news. The very few who dared to question were silenced through threats and attacks.
The Pashtuns thus remained voiceless and hopeless till one of their young, NaqeebullahMasud, a model and an aspiring actor, was killed by the security forces in a fake encounter in January this year. The police said he was associated with terrorists but the locals knew well that the young man had nothing to do with terrorism and was killed by the forces without any reason.
As the state reeled out lies, the seething dissent within the country burst forth like never before. For the Pashtuns, ``enough was enough``. The young among them formed themselves into a protest movement, perhaps for the first time in the history of independent Pakistan, under the umbrella of the Pashtun Tahafuz Movement (Movement for the Protection of Pashtuns, PTM).
The Pashtuns were clear about who was the cause of their humiliation and anger. As the PTM leader ManzoorPashteen told journalists a few months back: "We have to identify the place that destroyed us, It is GHQ!"
The Human Rights Commission of Pakistan (HRCP) put the rising tide of Pashtun dissent even more clearly: "The murder of NaqeebullahMehsud in a fake encounter by the police in Karachi on 13th January 2018 has stirred up grievances of Pashtuns in general and of the people of FATA in particular. `` The commission pointed out that the Pashtuns want an immediate end to extrajudicial killings, enforced disappearances and collective punishment to tribes and sub-tribes for allegedly sheltering or aiding terrorists. Ironically, many of the terrorists operate with the direct or indirect connivance of the security forces.
The Dawn columnist Zahid Hussain wrote about the pain of the Pashtuns more eloquently: ``They say they are angry with the state for allegedly sponsoring militant proxies for decades that have brought death and destruction to their cities and villages. The fire of religious extremism and bigotry instilled from outside has threatened their culture and values. Now these young men and women want to take destiny into their own hands. They want to be treated as equal citizens. They don't have guns in their hands; they believe in nonviolence. It is the Pashtun age of enlightenment; a rejection of obscurantism and oppression.``
Before Imran Khan became the Prime Minister, he could do by side-stepping the issue of his community's anger and ignore the long march to Islamabad and peaceful sit-in. But as a Prime Minister, he cannot live with his own community members marching to Islamabad, organising protests seeking his help in restoring dignity to the community and their homeland. Especially when their collective anger is targeted at his patrons in GHQ.