We want the ring: By Shobha Shukla 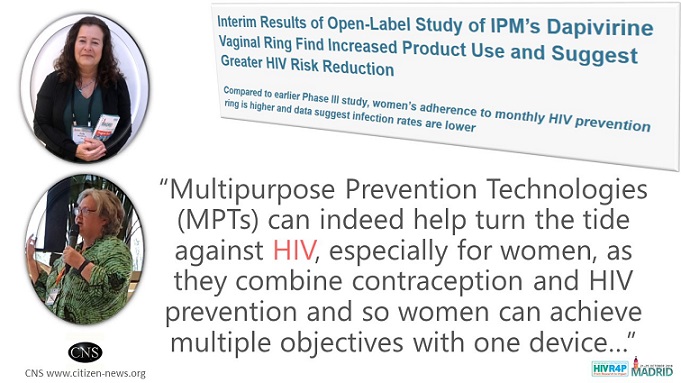 That seemed to be the resonating refrain of women at the HIV Research for Prevention Conference (HIVR4P2018) held recently in Madrid, Spain. And no, they were not talking about the engagement ring. Their focus of interest was the intra-vaginal dapivirine vaginal ring - a long acting female-initiated, self-administered product that has been found to be highly effective in reducing the risk of HIV infection.
Dr Zeda Rosenberg, founder and CEO of the International Partnership for Microbicides (IPM), told CNS (Citizen News Service) in an exclusive interview, "IPM developed this monthly dapivirine ring - the first long-acting microbicide product clinically shown to reduce HIV risk. It is a flexible silicon ring that slowly releases the drug dapivirine, which is an HIV prevention drug. More importantly, its use is under the control of women who can use it discreetly, if they want to, without their partner's knowledge. Any HIV negative woman, who is at risk of acquiring the infection, can herself put the ring in her vagina, leave it in place for 1 month and then replace it by herself. The drug is slowly released into the target cells and substantially reduces the risk of her HIV infection."
The ring is similar to vaginal rings commonly used by women for contraception except that it contains dapivirine, which belongs to a class of antiretrovirals (ARVs) called non-nucleoside reverse transcriptase inhibitors (NNRTIs) that prevent HIV from replicating itself. The long-acting ring sits high inside the vagina, where it slowly releases the drug directly at the site of potential infection, with low systemic absorption, over the course of one month the ring is worn. Women can insert and replace the ring themselves once every month.
Why the ring?
Key features of the dapivirine ring include:
- Low systemic drug absorption, no interaction with contraception, no related resistance;
- Easy to use and comfortable, woman-initiated and controlled, does not interrupt her daily activities; and
- Low manufacturing cost, stored at room temperature, and hence scalable.
Dr Rosenberg further said that, "We know that women like choices. It is not just one product that all women may want to or can use. We already have a highly effective HIV prevention option - the male and the female condom - that can protect against unintended pregnancy as well as HIV. But its uptake is not very high. We also have the daily oral HIV prevention or PrEP (pre exposure prophylaxis) pill - Truvada - which is highly effective in preventing HIV infection in women if used consistently. But we know that there are women who cannot adhere to taking a pill everyday and/or fear the stigma of taking PrEP as prevention and being misperceived as being HIV infected rather than uninfected. Yet others may not want the HIV drug to be circulating in their body. So for all these women, a ring that provides a high dose of drug locally where the infection occurs (and hardly any systemic drug in the blood stream) might be a perfect option."
When can women lay their hands on it?
No prevention option is good unless available. Dr Rosenberg informed that the ring is not available yet, as it is currently under review by the European Medicines Agency (EMA) for regulatory approval, based upon the interim open-label study results.
"We are hopeful to receive the first scientific approval from EMA by the middle of 2019. IPM will then seek WHO pre-qualification for the product. Our goal is to have the ring be accessible by women in developing countries. So one of the critical factors is to have a positive approval, getting WHO to pre-qualify the product, put it on its essential medicines list, so that other governments see WHO's recommendations and then process their own approvals. This will help facilitate approvals in regions where women face the highest HIV risk. Even though it is difficult to predict, but I would hope that we could see the ring in the market in 2020".
If approved, the dapivirine ring would be the first biomedical HIV prevention method developed specifically for women.
Moving towards multipurpose prevention technologies (MPTs)
"Yes, we believe in the promise of multipurpose prevention. We already have in development a combination HIV prevention and contraception 3-month long-acting ring, with dapivirine and hormone levonorgestrel, in collaboration with MTN (Microbicides Trial Network) and if that proves successful, we could be moving that product", said Dr Rosenberg.
As reported at the HIVR4P 2018, the 1st clinical study (MTN-030/IPM 041) results of this dual purpose vaginal ring that releases the antiretroviral drug dapivirine as well as a contraceptive hormone, showed that the ring was well-tolerated and there were no safety concerns. Second phase 1 study of this ring has already been launched.
Likewise, Second Phase I study of another polyurethane, dual-reservoir 3 month acting ring for prevention of HIV + HSV-2 (genital herpes) + contraception is also ongoing.
Multipurpose prevention tools not only have the potential to be more cost-effective and convenient but will also go a long way to address women's health needs in tandem, protecting them against HIV, unintended pregnancy and/or other STIs.
Kay Marshall, Senior communications Advisor at AVAC, told CNS (Citizen News Service) that MPTs can indeed help turn the tide against HIV, especially for women, as they combine contraception and HIV prevention and so women can achieve multiple objectives with one device and also get them at one go, avoiding multiple clinic visits. This is especially true for young women, who often worry about unintended pregnancy and are also at increased risk of acquiring HIV. So HIV prevention could be an added benefit to them in addition to protecting themselves from pregnancy. Ending the HIV/AIDS epidemic will be possible when women can choose from multiple options that meet their needs, which may change throughout their lives.
(Shobha Shukla is the Managing Editor at CNS (Citizen News Service) and was awarded HIV Prevention Research Science Journalism Fellowship 2018 in Spain. Follow her on Twitter @Shobha1Shukla or visit www.citizen-news.org)