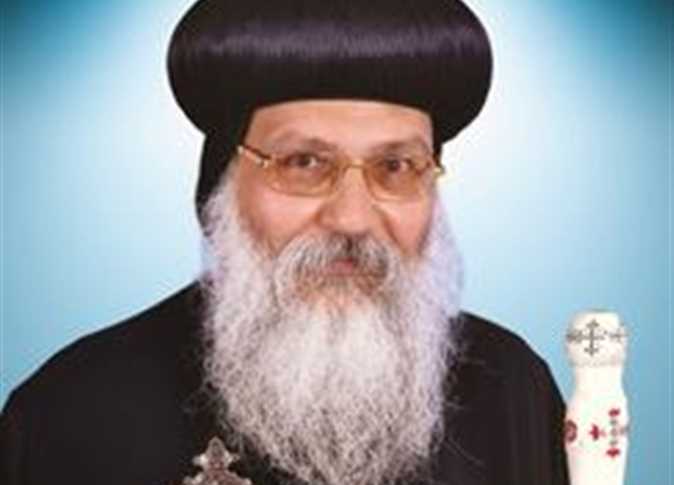 The circumstances surrounding last month’s murder trial where two monks were found guilty for last summer’s killing of Bishop Epiphanius, head of the Orthodox Abu Makar Monastery, are troubling. They have revealed how Arab-Muslim Bedouins and the Coptic pope of the Egyptian Orthodox Church benefited from the sordid ordeal. The state was the facilitator. The former succeeded in a covert land grab that would have otherwise and in any other way sounded an alarm. The latter solidified a provocative faith initiative when the loudest voice against his stance was expunged.

This voice belonged to Bishop Epiphanius who was murdered on July 29 inside the fortress walls of the Abu Makar Monastery in the middle of the desert (110 kilometers west of Cairo). Bishop Epiphanius had two ideological enemies. The first was the Egyptian government of which he had become a serious thorn in the side since 2014. The state wrongfully ignored the bishop’s written complaints about desert Bedouins stealing monastery agricultural products, squatting on monastery acreage and confiscating ancient Christian relics off the land since 2013. Carrying firearms, the Bedouins gradually displaced the monks and took over their land. Consequently, the monastery lost 1,300 acres by the time Bishop Epiphanius was silenced once and for all last year under mysterious circumstances.

Now, in recent days, two fellow monks of the same monastery have been sentenced to death for his murder by a court provided with spurious evidence after a speedy trial. Furthermore, as Sharia law necessitates with any death penalty, the grand mufti of Egypt must soon pronounce his “opinion” on the guilty verdicts and penalty (hanging) exacted by the court. Two monks are subjected to the humiliation of Islamic law and face execution while potentially innocent. These “suspects” were guided into the hands of the police by the Orthodox Church office.

Within a few days of the murder, a phone call was made from Pope Tawadros II’s headquarters in Cairo to a monk in the monastery. According to Dr. Mervat Alnamer, this monk was instructed to write down on paper the names of monks told to him during the call, submit it to the police, and indicate that “one of these names could be the killer.”

The two monks arrested and convicted of this crime claim they are innocent. Ashiea, the first arrested, was cursed and tortured by police and made to enact the crime. Ashiea admitted his differences with the late Bishop Epiphanius but said he would never take his life. Later, others testified to Ashiea’s character and affirmed these sentiments, according to the same source.

Actually, Ashiea was in agreement with the late bishop on a major divisive argument going on for some time within the Orthodox Church. Like the late bishop, Ashiea was publicly opposed to the pope’s call for Orthodox “unity” with the Catholic Church and aligned himself with the bishop’s outspoken rejection of the controversial idea being floated by Pope Tawadros II – the second of Bishop Epiphanius’ ideological enemies.

The circulated video of Ashiea’s court trial revealed him recalling to the judge that the police officer interrogated him about his Facebook page. This might have been a normal line of inquiry given that Islamic authorities object to any criticism of Islam. However, in this case, the police officer targeted Ashiea’s social media page that expressed views against the Church “unity” issue and noted his large number of followers -- an unusual concern for Egypt’s Islamic police force that normally seeks only to protect the president’s image and keep intact Islam’s deceptive practices.

Ashiea, like all monks “dead to the world” and vowing poverty upon entry to the monkhood, was not offered a legal defense by the church as would be expected. Instead, church authorities condemned him instantly and stripped his monkhood, which ultimately led to the police brutality he received. The church hierarchy estranged Ashiea early in the process in the midst of ongoing police interrogations of the 145 monks living in the monastery.

Until this moment no one knows on what grounds church authorities singled out Ashiea for dismissal before the finalization of police crime scene investigations. Even now there is no evidence linking Ashiea or his “accomplice,” Philtaos, to the crime. The hollow iron pipe alleged to be the murder weapon was found on the ground at the murder scene on day 11 of the investigation and was presented in court without fingerprints or any trace of the bishop’s blood. An expert watching the trial noted that pictures of the bishop’s dead body were withheld presumably because his severed skull was split open and not smashed in by a blunt device – the iron pipe under scrutiny.

According to the Dr. Alnamer, as arrests were being made, the monastery librarian dropped a reminder on social media about the heated theological dispute over Orthodox baptism differing from Catholic doctrine, which divided the monks of the monastery into two factions. She pointed to this as a plausible motive for the murder. The opposition to the establishment was led by Bishop Epiphanius. The deep rift over baptism is centered in the issue of Orthodox “unity” with the Catholic Church.

Immediately after the bishop’s murder, a spokesperson representing a three-day meeting arranged by the pope with his Council of Bishops upon discovering the bishop dead, announced a new policy for monks to follow. These amounted to a new set of restrictions related to their use of social media. Monks would no longer be allowed to appear in public media of any type and were given 30 days to shut down all personal accounts on social media. Instead of surveilling commentary between monks as a useful tool of discovery in the murder case, the church silenced the monks and shut down that possibility for police.

Meanwhile, police accepted everything placed before them without reservation and moved forward on zero grounds. However, until this writing, police have not appeared on the vast grounds surrounding the monastery to make arrests and return monastery land to the church, which belonged to the Orthodox for 1,600 years.  This probably won’t ever happen since the pope as the current interim head of the monastery has not even raised the issue of the stealth transfer of their ancient lands to the Bedouin tribes.

After seven months, there are many more questions than answers. Many Egyptians do not believe the official narrative explaining what happened that day in the secluded monastery or the findings of the state in its investigation of the bludgeoning. Egyptians are suspicious of the rushed outcome. Most likely there will be an appeal. In the end, the events of Abu Makar Monastery represent a glimpse into the dark recesses of church and state politics where no Egyptian dares to tread.