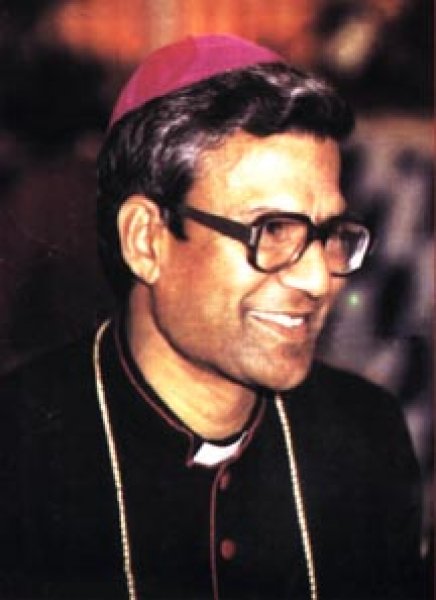 Bishop John Joseph ended his life to end the blasphemy laws of Pakistan, which are the time bombs tied to the bodies of the Christians, while the remote control is in the hands of the Muslims who can press the button any time to blow them up. The Pakistan of today is under the martial law of religion.  Misusing the blasphemy laws, fundamentalists keep fanning the fire of hatred endangering the freedom of the peace-loving minorities. The article was written about 11 years ago.

In 1994, Manzoor Masih was condemned to death in a blasphemy case. While he was returning from a court hearing with his two companions, he was killed in broad day light and the other two were wounded. Bishop John Joseph held a press conference. The murderers were recognized and a FIR was lodged with the police. According to Dawn, a daily Pakistan newspaper, of the 27th of April of 1994: "But till today the murderers are roaming free because some terrorist religious groups are protecting them and the government is afraid of them."17

"Dr. Joseph declared: Until the murderers are caught and 295-C is repealed we shall take out processions and go in for hunger and no work strikes. We will not only court arrest but we shall also offer our very lives so that inside and outside Pakistan, all may know, what is happening to the minorities in Pakistan. That is our future programme..."

In 1996, he reasserted his offer that appeared in the Human Rights' Office newsletter of August 1996 from Faisalabad: " As it is, blood is flowing, meaninglessly, all over Pakistan. To stop this bloodshed we offer ourselves-- we are ready to suffer, so that peace may come in the town and villages of Pakistan. This was our   message last year, when we were booked for treason, this is our message this year and this will remain our message, till we reach our goal; and justice and peace prevail in Pakistan."18

Prayer, fasting and peaceful demonstrations were the answer of Bishop John Joseph to violence. At the Bishop's  conference  in Khatmondu, Nepal, in 1996, he said : "With courage based on prayers and fasting we must speak out against violence but with love we must try to influence the terrorists to change. That is what Jesus meant when he said, turn the other cheek, when they hit you on one. In Pakistan, not only Muslim religious extremist groups are spreading violence and injustice but even the government with laws like death sentence in Blasphemy and many unjust regulations in suppressing us mercilessly. But what is our answer? We care for the Muslim lepers and other patients in our hospitals. We provide the best education to them in schools. We open medical centres for the drug addicts. We help   Muslims when they are in need due to floods, we build houses for them. Provide them with agricultural aid. Their girls are welcome in our sewing schools. We join them in celebrating national days. We struggle together against local, regional and national problems. That is how the Christians must turn the other cheek. And the same time denounce violence and terrorism loudly and clearly. Non-Christians appreciate it. More and more Muslims and Muslim organizations are joining us openly or secretly in our struggle for justice, peace and unity. With many maulvis (Muslim clergy) we have good but private friendship... We have some health and agricultural projects in common with Muslims all over Pakistan. Our struggle against drugs and AIDS is common..." 19

Bishop John Joseph gave his life to protest the death sentence of Ayub Masih under the blasphemy laws.  Because of these laws, the Christians are not allowed to hire lawyers other than Muslims in a country where the police are Muslim, the judges are Muslim, and the predominant atmosphere is thick with fanatic Muslims. Christians are three percent and poor and have no right to vote. They are discriminated against for jobs and tortured systematically by the Muslim theocracy. They are beaten and jailed  for  no  reason  and condemned to death without evidence. Their houses and churches are destroyed and their women are abducted and raped. Christians live under the constant fear of  the  terrorism that is sponsored by the state.

Bishop John Joseph had fasts unto death, prayed, addressed gatherings throughout the nation, arranged peaceful demonstrations, wrote in the media, and met with leaders to stop  violations of human rights of minorities.

Violations of human rights are caused by the blasphemy laws and separate electorate system. To stop these violations, Bishop John Joseph offered his life in the dark corridors of the same court where Ayub Masih was condemned to death under a false charge of blasphemy. The Bishop faced the solid walls of arrogance wherever he turned for help. Sacrifice of life seemed to be the last resort to Bishop John Joseph to protest injustice.  He thought his sacrifice would open the eyes of humanitarians around the world to the demons of tyranny against minorities in Pakistan.

*1991: Gul Masih, the first victim under the blasphemy laws, is arrested and tried

* 1997, October 14 : Mohammed Akram lodges a blasphemy report against Ayub Masih and his brother Samsoon. Both are arrested

* 1997, October 30 : Bishop John Joseph addresses a rally to remind the promise of the government that no charges would be laid without preliminary enquiries.

4Mirror, The. a newsletter of the National Commission for Justice and Peace from Lahore, Pakistan. October/December 1997

7Campus Direct. A monthly from California. 22nd of November 1996.

12Our Response to Violence. The National Commission for Justice and Peace, Pakistan. P. 9

13Our Response to Violence. The National Commission for Justice and Peace, Pakistan. P. 12

SHANTINAGAR, NEXT IN THIS SERIES

Stephen Gill, a multiple award-winning Indo/Canadian self-exiled poet, fiction-writer and essayist, has authored more than thirty books. He is the subject of doctoral dissertations, and research papers. Thirteen books of critical studies have been released by book publishers on his works and more are on the way. His poetry and prose have appeared in nearly nine hundred publications. The focus of his writing is love and peace.