Imran Returns from US with a World Cup woes. By Samuel Baid 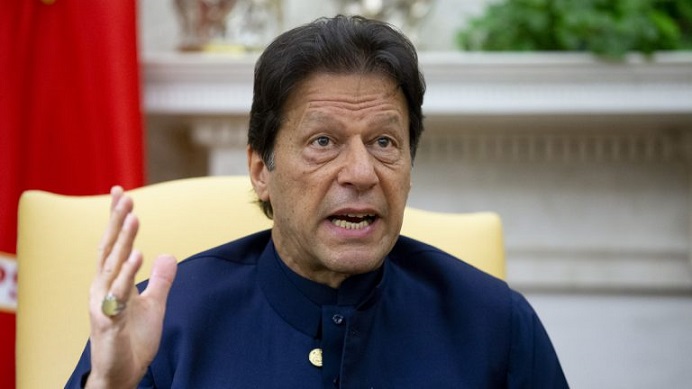 A cynic may remember the three-day visit of Pakistan’s Prime Minister Imran Khan to Washington for three white lies told by him and his host President Donald Trump in July. The two leaders, two of the three lies flabbergasted the world.

Playing a good host, Trump entertained his host by the lie that India’s Prime Minister Narendra Modi, during the G20 Summit in Osaka (Japan) in September, had asked him for mediation on Kashmir. India angrily denied. But this perhaps was only meant to give Imran an at-home feeling. Imran felt so thrilled and at –home that in his white salwar kamez, he made bold to sit cross-legged before Trump.

In his lie elsewhere, Imran Khan claimed that Pakistan’s Inter-Services Intelligence (ISI) had led the American CIA to the hiding of Al-Qaeda leader Osama Bin Laden in Abbottabad, May 2011. CIA’s former Director David Petraeus denied it. He said the ISI was not aware of Osama’s presence in Abbottabad and did not know about US operations against Osama – May 2, 2011.

His second lie had only local significance. He told a gathering of Pakistanis in Washington that the media in Pakistan was free than it was in the United States or Britain. He said this when journalists all over Pakistan were protesting against undeclared censorship being carried on by7 security forces. Journalists reminded Imran that he and his party (PTI)  were nothing before the media began building them up in 2011.

The above-mentioned three lies are not the subject of this article. They are mentioned here to say that lies bind Pak-United States relations. See, Trump had invited Imran but about 24 hours before he boards a Qatar Airline’s plane for Washington on White House official expressed ignorance about Imran’s visit. Did it indicate a rift between Trump and his officials over Imran’s White House visit?

Both Trump and Imran had their own motives in this meeting. Trump had personal motives related to his election hopes next year, while Imran was motivated by his country’s national interest and of course for kudos at home for resetting relations with mighty America, something the governments before him could not do. On his return home he got a massive reception from his party men as a victor back from war. Thrilled Imran said he felt he had returned home after winning the World Cup.

The credit for giving this feeling to Imran and his countrymen goes to  Trump’s PR tactics. After all, he is a big business man. He gave Imran seemingly a very “simple” task. The task is to persuade the Taliban to ceasefire and join the Ashraf Ghani’s government in Kabul If that happens, Trump can withdraw American forces from Afghanistan and say, during the election campaign, that he has fulfilled his last election promise of withdrawing American forces from Afghanistan. Trump sent Imran back home after enthusing him to do this. He reminded him Pakistan had earlier persuaded the Taliban to join peace talks in Murree. So overwhelmed, Imran could not repeat his Army’s tactical denial of Pakistan’s influence on the Taliban.

US representative Zalmay Khalilzad has held eight rounds of talks with the Taliban leaders in Doha (Qatar). Before every round it is said an agreement is near. But the Taliban leaders belie this impression by reiterating they will not talk to a puppet government in Kabul and to ceasefire before the US announces its withdrawal of its troops from Afghanistan. Also, we should remember there are thousands of armed Taliban spreads all over Afghanistan who have got used to living by guns and bombs. They cannot be lured into any civilized system.

If a miracle happens and the Taliban agree to share political power in Kabul, will that guarantee peace in Afghanistan? Americans are in such a desperate hurry to extricate themselves from Afghanistan that they are willing to jettison all the good work they did in this country in the past about 18 years and abandon the Afghan people whom they inspired to adopt democracy’s care for human rights – especially rights of women – education for all and decent  living. They are forgetting tons of blood the Afghan men, women and children and Allied Forces have shed for achieving these goals. Of course, they are forgetting billions of hard earned dollars of American tax payers which were spent in Afghanistan in these many years.

It is also unimaginable that the US has not studied threadbare its policy of cajoling anti-democracy Taliban into a democratic dispensation. After eight rounds of talks in Doha, US representative Zalmay Khalibzad should have been convinced that the target of the Taliban is the restoration of their rule in Afghanistan as it existed before the US bombed it out in October 2001. Even if the Taliban join the Ghani Government they may stage a coup within weeks or months of the exit of foreign forces.

Trump has tasked Imran to persuade the Taliban to share power in the Ghani government. If he fails he faces Trump’s fury. But, as some Pakistani commentators have opined if he succeeds and, thereby helps the exit of American forces from Afghanistan, there is previous history of US-Pak relations which says Pakistan is discarded once the US has used it –post CENTO and SEATO, post-Afghan war of the 1980s and post half fought war on global terrorism in the 2000s and the 2010s. Pakistani expected the US to stand by them in their war against India in 1965 and in their genocide of Bengalis and in the consequent war against India and the Mukti Bahini in 1971. The US perception, as summed up by Trump in his new year tweet in 2017 is that the US has always played a sucker for Pakistan.

As said earlier lying and cheating has been mutual. Pakistan’s former diplomat Rustom Shah Mohmamd writes in the Express Tribune Trump castigated Pakistan in his tweet “for not aligning its policies with the core US regional interests despite having received massive assistance from Washington”.

On July 22, we see US duplicity towards Pakistan in full play. A smiling Trump told Imran of the laudable role Pakistan had played in solving the conflict in Afghanistan and praised its (Pakistan’s) “great people”. All this with a lollypop that he would be willing to mediate on Kashmir. This lollypop is being ticked with gusts although Pakistan and the US know very well that India will not allow third-party mediation. However, Kashmir and relations with India were high on Imran’s agenda for talks with Trump. But this agenda was reduced to a better be forgotten formality by Trump’s agenda  on Afghanistan.

The euphoria of “winning the world cup” is over. The people now want to know what gains Imran Khan’s Washington visit has brought to Pakistan. Rustom Shah Mohmamd writes that the only solid gain is a change in attitude. But that is notional Pakistan Press says the visit made no tangible major breakthrough in Pak- US bilateral relations. ………………….. that Imran’s Washington visit should have resulted in some tangible economic transaction between the two countries. He questioned Pakistan’s capacity to negotiate and implement any serious international transactions.

Imran could not get a Trump assurance on the resumption of the Coalition Support Fund (CSF) which Pakistan used to get as a partner in the US-led war on global terrorism. There was also no assurance for saving Pakistan from being black-listed by Financial Action Task Force (FATF) for terror and terror funding. The arrest of the Establishment’s blue-eyed terrorist Hafeez  Saeed before Imran boarding the Washington bound flight did not seem to impress Trump. Incidentally, Imran has at least twice warned of Pulwama type terrorist attacks after India scrapped Article 370 that gave special status to Kashmir.

Yes, Trump desired to raise trade with Pakistan not 10 times but 20 times. He also released $125 million for the renovation and repair of US-built F-16 fighter jets. Recently his government removed restrictions on the movement of Pakistani diplomats and diplomatic staff stationed in the country. The restriction, imposed last year during Trump’s anti-Pakistan fury, had confined these diplomats within 25 miles of their workplace. This is a paltry gesture as compared to the task Imran is assigned by Trump. Failure or success in this task will both be dangerous for Pakistan. If Imran fails Pakistan will face Trump’s ire. There will be two consequences if he succeeds: (a) the US will as in the past, discard Pakistan after having used it (b) or the US may try to re-establish cold war period type friendship. This will provoke the wrath of jealous China. Pakistan must accept that it is no more single now. Any attempt to serve two masters will ruin it. Imran  should have a second look at what he calls world cup to be sure that he has not returned from Washington with a cup of woes.