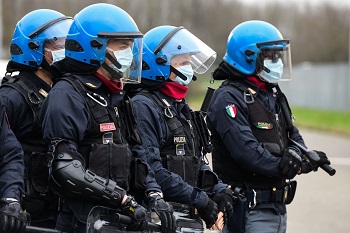 For years I have focused on the cruel and needless suffering of the Christian Copts of Egypt. Religiously inspired laws and the dictates of a regime governing the Islamic state has always been the enemy of the Egyptian Copts. Long ago a barbaric Islamic army invaded and occupied the Pharaoh’s land, for centuries ruling with severity the native Christians. Islam ruled with barbarity and deception.

Is the rest of the world seeing a modern-day version of this right now? There seems to be rule by deception and the top down dictates that stem from it -- the same formula. The World Health Organization (WHO) along with its agents who head nation states and acting as official authority over a “new disease”, force us into charts and graphs and experts to lock us down under house arrest, distance us from each other and muzzle our mouths with masks. Like the fierce Islamic warriors who cut out the tongues of the native Copts of the mid-7th century, dissent is silenced. Our current warlords are world-wide authorities riding a pandemic high, most likely one they created.

Just like our unfortunate friends across the world in Egypt our sacrifice seems not as much for the health and welfare of mankind as it is to succumb to the control of a certain ruling class. Bio-weapon or not, manmade or natural, the Covid-19 and its vultures have swept down and made the best of the very controversial data for a power grab. Like the useful Shariah, the “facts” are given and the solution is provided. Let us be grateful.

By imposing harsh measures that contradict science experts and lead to deterioration of health and limit our God-given rights and freedoms, the Western warlords have gotten us to beg for our punishment so the “curve can be flattened.” We enter their program and wait, watch and listen for the next dreaded word spoken from a podium.

But their death charts are already debunked. Who cares? Just go along. Get through it. But alas, we won’t ever get done with it. The joke is on us. The good people of the United States know this already from the 911 event and its aftermath, receiving the Patriot Act and universal surveillance. Now we are all Copts of Egypt.

Only one official source of information exists, which is scripted and distributed over the airwaves via mainstream media just like Egypt’s age old state-owned broadcasts. It is alarmist and creates fear and panic. This leads to loss of common sense in the citizenry and contributes to irrational beliefs. At the same time there are many highly educated scientists and doctors disagreeing with the official assessment and solutions. We listen but are not able to adopt their sensible course of actions – it’s too late. The forces of the one worldwide alliance own all the science worthy of conveying, and humanity has already paid dearly for it. We now have all we need to know. We are guilty. We are killing our neighbors and even our families.

The only thing to truly fear, and only if this fear leads to a call to action for all, is the concept of the “new normal.” Run far from this concept and reject it. It is a ruse, and we must raise our voices up against it. The Shariah is mere milquetoast in relation to mobile tracking. It is the disintegration of freedom offering up control over our lives to the world dictators (WHO, CDC, World Bank, Bill Gates, Neil Ferguson) who arguably put us and keep us in this difficult status. Let me speak as a Copt. It never ends when left up to them.

The world can use this opportunity now to launch in-depth conversations (already begun) between people around the world in favor of medical freedom and opposed to the imposition of “one size fits all medicine,” which leads to mandated vaccines. (See Dr. Shiva Ayyadurai’s work). If we are allowed the time to do so, this is the rational path forward.

But what honest voices will be heard in Italy where first political wrongs must be righted in order for that to happen? Much before the Covid-19 crisis, Mr. Conte, without a political party, shoehorned in as prime minister. Has the Covid-19 aided his dictatorial stance over Italy? Yes, for sure. For one, the Conte government is allowing illegal Islamic immigrants to roam freely across Italy while natives remain shut-in and follow state orders.

Three weeks into President Trump’s travel ban between the US and Italy while the frenzy was still building including top-down mandates for the new health dilemma, Italy’s Dr. Prof. Stefano Montanari, scientific director of the Nano diagnostic laboratory in Modena, announced a huge discrepancy between his findings on causes of deaths labeled Covid-19 (just 2 were legitimate) and the findings of WHO issued through its mainstream media mouthpieces. This news item on April 5 would become important for the cause of truth for those interested in learning it.

This first dose of truth came from an Italy where soon the constitution would be waived in favor of arbitrary executive orders without approval. Forget the parliament, not important during these trying times. As average Italians raged and mocked the powers-that-be for stealing their freedoms in the name of dubious science fast forward to April 25 when beneath their balconies a celebration took place in the streets, streets that had been either stark empty only moments before or full with immigrant gangs. During Italy’s dire state of emergency, the Leftists were in full swing. It was Liberation Day!

Not only were conservatives made to hear the noises of a false historical narrative where the American and British liberators play no part, but seared on their minds had been the indelible image of one lone man, an unmasked Italian, pray tell, who had fallen prey to the new rules. Apparently, the newly imposed regulations involved police drones and one that could swoop down on an unsuspecting non-conformist walking along a beach with his dog. No telling what might have happened to the current disease rate had this Italian gotten away and roamed the streets.

Whereas the Copts of Egypt stay uniform in their beliefs and customs and general outlook on life mostly through the church in order to combat legalized vice, Italians, as with most Western nation citizens confronting the enemy strain and its directors of safety, are divided. Levels of education and information are separating the programmed minds from the less programmed minds and the totally un-programmed minds. The latter being the most helpful for the future of humanity everywhere.