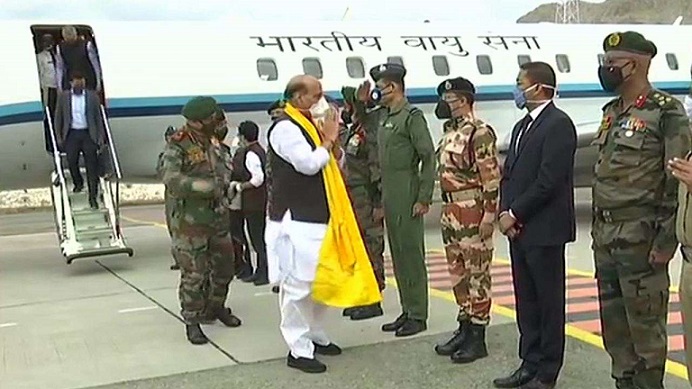 Sub:- (i)- India has only one hope of removing China from Indian territory that is through militarily achieving independence of Tibet (ii)- India should know that militarily & economically much more powerful China can easily ask Pakistan to make united-J&K another Bangladesh, supported by entire Muslim-world (iii)- If Government of India (GoI) thinks it can’t protect sovereignty & territorial integrity of India due to military weakness then should go for suzerainty under some dominant military power’s sovereignty

---When Indians of British-India were fighting non-violent war of Independence (in which about 1 million were killed and about 15 million were displaced in most gory situation during partition, so much for for non-violence) from Britishers under the leadership of Gandhi, Nehru, Patel etc about 565 princely States were functioning as suzerains under the sovereignty of Britain including my native State of Kota in present day State of Rajasthan.  After independence my State also acceded to India due to imperative advice from Britain that democracy is not only a better way of political management but also the dominant power in the modern world. But that does not mean that Independent India (merged British India + princely States) will not follow rule-of-law or will not properly discharge its martial responsibilities.

Here one fact is worth mentioning that my native State Rajasthan never allowed any outside country or military power to DIRECTLY rule over the people of Rajasthan, whether it was Muslims / Mughals or Britishers. Rajasthan fought if it was possible (as Rana Pratap did when he militarily snatched all but one fort from Mughals) or when it was not possible militarily to fight, then the princely States of Rajasthan became suzerain under the sovereignty of these dominant military powers of Mughals & Britishers. But come what may, the people of Rajasthan were always ruled DIRECTLY by Rajasthanis only.

With this State policy (of princely States of Rajasthan) in view, the policies of the GoI are dereliction of its martial responsibilities. Here it is in context to add one more point that any one who can not defend the territory of his / her country does not know even the abcd of politics, Hence Gandhi, Nehru, Patel etc who trifurcated India for taking independence did not (as per Rajasthan) know politics, especially about its martial responsibilities.

Presently China is in possession of Indian territory which it has taken since April 2020 but martially derelict GoI is not making public the facts about it (as mentioned at https://www.pakistanchristianpost.com/opinion-details/3630 ). As far as the July 17 speech by Defense Minister Rajnath Singh at Ladakh (as reported at  https://www.thehindu.com/news/national/defence-minister-rajnath-singh-arrives-in-leh-to-carry-out-security-review/article32109065.ece  and https://www.youtube.com/watch?v=O4F5QfJwnGc ) it is nothing more than whistling in the dark.

Rajnath should know that [despite personal relations of PM Modi with President Xi Jinping (due to 18 meetings of Modi with Xi) and since 2020 May despite 4 meetings of military commanders of China and India and despite diplomatic talks between Foreign Minister and National Security Adviser of India with their counterparts in China] if China is not prepared to restore the status-quo-ante of April 2020 in Eastern Ladakh then it will not do so unless India restores it with military force.

Rajnath should further know that China is interested in military showdown with India due to two reasons (1)- Primarily, because China is angry with India as China thinks that India is feeling emboldened because of its growing strategic alignment with the United States through Quad about Pacific and also by intentions of harming CPEC that is why China took the matter of August 5, 2019 action of India (to amend and repeal Article 370 & 35-A of the Constitution) to United Nations which China perceives as a threat to its interests about CPEC in and near United J&K (more so after hollow statements of Ministers of GoI about retrieving militarily the PoK, Gilgit, Baltistan and Aksai Chin).

(2)- Secondly, after said August 5, 2019 action of India, initially many Muslim countries were not supporting Pakistan about Kashmir. But not only:-

(i)- After June 22, 2020 call of  the ‘Organization of Islamic Cooperation’ (OIC) on the international community to strengthen its efforts to assist the people of Kashmir to decisively practice their legitimate rights denied for decades (allegedly due to anti-Muslim policies and Islamic phobia of GoI), the situation has changed in favor of Pakistan. But also -

(ii)- The latest Chinese closeness with Muslim countries in Middle-East (through huge investments by China in these countries) has made the task of China & Pakistan easy about snatching rest of united J&K from India militarily, also in view of India’s exit from Afghanistan and Iran (from Chabhar port, railway projects etc in Iran). In a nut shell India should know that China can easily help  Pakistan even militarily to make united-J&K another Bangladesh supported by entire Muslim-world (Independent united-J&K suits china more than united-J&K with Pakistan because of CPEC in and near united-J&K).

In such situation India has chance of any military success against China & Pakistan only if India works for dismembering:-

(A)-  China, mainly through independence of Tibet (and as sideshow of Taiwan, Xinjiang, Hong Kong) by constraining Tibet Government-in-Exile (with office at Dharmshala, in the State of Himachal Pradesh, India) to realize its political objectives for which Tibetans started their Government-in-Exile in India.

(B)- Pakistan,  after achieving dual citizenship for displaced Hindus & Muslims (one for India and other for Pakistan or Bangladesh by keeping in mind that the last word of India’s partition is yet to be written) through plebiscite in united- J&K (after retrieving, militarily if necessary, the PoK, Gilgit, Baltistan and in second stage Aksai Chin) as mandated by ‘ Instrument of Accession’ which reads as -  “[the question of Accession should be decided in accordance with the wishes of the people of the State, it is my Government’s wish that, as soon as law and order have been restored in Kashmir, and her soil cleared of the invader, the question of the State’s Accession should be settled by a reference to the people. Yours Sincerely Sd/- Mountbatten of Burma]”.

These can be achieved (as Rana Pratap did in Rajasthan ) only, in the present circumstances, with the active support (even if non-military) of secular democratic world-community as mentioned at  http://www.pakistanchristianpost.com/opinion-details/3628

If India finds that the free world led by the USA is not coming forward to help India in said dismemberment of China & Pakistan then India should forget about any military solution for restoring the status-quo-ante of April 2020 in Eastern Ladakh and should go for suzerainty under some dominant military power’s sovereignty (as Rajasthan did when took suzerainty under sovereignty of Mughals and Britishers) especially which will ensure that the people of united- J&K (including PoK, Gilgit, Baltistan, Ladakh, Aksai Chin) do not remain under DIRECT rule of Pakistan or China.

It is hoped the Government of India (for change sake) will realize its martial responsibility and will not expect the civilians to do what military is supposed to do (namely giving lives and blood) and  [instead of subjecting Indian civilians of united- J&K (including PoK, Gilgit, Baltistan, Ladakh, Aksai Chin) to foreign DIRECT rule of Pakistan and China] will see to it that they come under DIRECT rule of India - preferably through sovereignty or if impossible then through suzerainty (this is how we always did in Rajasthan).