Mehbooba right. Not so much 35-A rather Article 370 has meaning when about half of J&K is still with Pakistan. By Hem Raj Jain 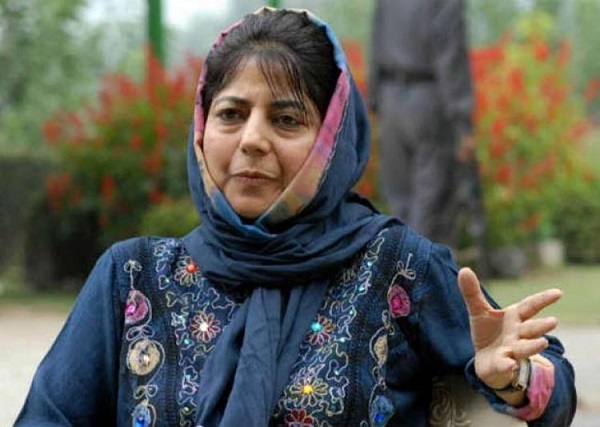 Mehbooba should take advantage (of the wish of the USA to stabilize Afghanistan) by working for Greater-India (from Myanmar to Afghanistan) which will solve the chronic & gory Kashmir problem too.

--After a meeting of all the political parties of J&K on June 24 with Prime Minister Modi, the former Chief Minister of J&K Mehbooba Mufti again demanded the restoration of Article 370 of the Constitution of India ( as reported also at https://www.greaterkashmir.com/kashmir/all-party-meet-mehbooba-mufti-demands-restoration-of-article-370-statehood ). On August 5, 2019 Modi government got repealed through Parliament the Article 370 along with Article 35-A (which protects the land and jobs of the J&K for the people of J&K, but such constitutional provisions are there for some other States too).

The Government of India (GoI) also bifurcated the State of J&K into two Union Territories (UT) of J&K and Ladakh (India could do it because India is presently not a Federal system hence GoI could do it despite warning given by some opposition leaders that if it is allowed then GoI can convert any State of India into UT by giving similar specious arguments). Though GoI later said that it will restore the Statehood of these UTs at appropriate time. But Modi will not restore Article 370 because as Mehbooba also said that “it was a 70-year-old BJP agenda and they fulfilled it” (the repeal of Article 370 has brought handsome electoral dividends to BJP and if Modi restores it then it will hugely damage BJP, electorally because Article 370 is a reminder to India that the accession of J&K to India is not final unless there is plebiscite as mandated by IoA).

About J&K one thing should be clear that practically every one (including & especially Pakistan) has been talking about plebiscite in united J&K as per UN resolution of 1948 which India has consistently countered by saying that as per UN resolution Pakistan was supposed to vacate Pak Occupied Kashmir (PoK) and Gilgit & Baltistan (G&B) which it didn’t do, hence India could not carry out plebiscite in J&K. This is an absurd and legally objectionable argument by India which surprisingly has been condoned even by the people of J&K (including Kashmiris).

Since August 5, 2019 the people of J&K (especially  Muslims) must have come to know the ground reality that (despite meaningless noises of government of Pakistan including PM Imran Khan at UN and at other national & international forums) Pakistan is not going to take any military action or other effective action (like peace-march of people of PoK & G&B to Kashmir) against India. Moreover China (which Kashmiris tried to approach as per former Chief Minister of J&K Dr. Farooq Abdullah) is also not going to help separatist Kashmiris, militarily for getting away from India or for Kashmir solution. Therefore Mehbooba should adopt a pragmatic approach and should try to solve the chronic & gory Kashmir problem as given below by realizing that there is no soft & easy option available to Kashmiris in this matter:-

(1)-  The relevant part of ‘Instrument of Accession’ (IoA) of J&K to India ( https://www.mtholyoke.edu/acad/intrel/kasmount.htm ) reads as “ Consistently with their policy that in the case of any State where the issue of accession has been the subject of dispute, the question of accession should be decided in accordance with the wishes of the people of the State, it is my Government's wish that as soon as law and order have been restored in Kashmir and her soil cleared of the invader the question of the State's accession should be settled by a reference to the people. Yours Sincerely Sd/- Mountbatten of Burma]”. This raises one interesting & disturbing question that if about half of J&K after 74 years is still with Pakistan (and some with China through Pakistan) then why the then Maharaja of J&K brought J&K to India through this IoA.

(2)- The people of J&K (especially Kashmiris) never understood that the former ruler of J&K, Maharaja Hari Singh and even the Government of India, have no right to decide about the accession of J&K, as is evident from IoA. This right of accession lies exclusively with the people of united J&K (J&K and PoK and G&B combined). As per IoA, the people of J&K have nothing to do even with United Nations rather it is the responsibility of India to get plebiscite by getting the soil of United J&K cleared of Pak invaders (including non-citizens of united J&K) and after getting law and order restored in united J&K. How India does it is India’s headache whether by its own or through the UN or by getting military help from any friendly country.

(3)- But Kashmiris never pressed for such plebiscite through writ petitions in J&K High Court and Supreme Court of India though I asked them repeatedly through national and international media (including Kashmir media, the ‘Wadi ki awaz’ ) as given at https://www.pakistanchristianpost.com/opinion-details/3438   and

(4)- But now Mehbooba can easily do it because presently the USA is leaving Afghanistan where the USA is facing a huge ethical problem. The USA along with its allies (including NATO) has been in Afghanistan (post 9/11) for the last 20 years but despite its best efforts it is leaving Afghanistan in the hands of Taliban which is not a promising scenario for the people of Afghanistan (especially about their human rights). India could have easily helped the USA in establishing human-rights-friendly Afghanistan (through Greater-India) but India is an over-smart country and doesn’t commit its military for bringing peace in the region (even when it is needed in the vital interests of India).

(5)- Mehbooba can take the lead to realize this Greater-India which will address the grievances of Pashtuns, Balochs, Sindhis, Kashmiris, Rohingyas, millions of Bangladeshi illegal immigrants in India, Myanmarese under military rule etc.  Mehbooba’s party (PDP) being the major political party of the only Muslim majority State of India (the J&K) will easily be able to win the support of Muslim majority country of Afghanistan.

(6)- Because no political party was coming forward [to peacefully solve the disputes with China & Pakistan and to recover huge State-capital of Rs about 1,000 Trillion (Income tax) which will strengthen & improve the Indian economy and its military infrastructure] hence I suggested that the military veterans of India should launch their political party for this purpose, as mentioned at:-

(7)-  Mehbooba’s party the PDP can easily mobilize world community (the USA sponsored UN) for the following because India was a member of the UN since 1945 and all these happened after 1945:-

(i)- For plebiscite not only in united - JK but also in Balochistan (who’s IoA was taken by Pakistan under military pressure despite contrary resolution by Parliament / Jirga of Balochistan).

(ii)- For providing ‘dual-citizenship’ for about 80 million (about 20 % of present population of Pakistan and Bangladesh) forcibly displaced and descendants of such forcibly displaced Hindus / Sikhs because there was no provision of population transfer in ‘Indian Independence Act 1947’. And to further ensure (under military pressure) proper law & order in present Pakistan & Bangladesh for these Hindus (Punjabis, Bengalis and Sindhis) who will go over there (after dual-citizenship) in their motherland as their citizens either for living over there or for touring or for doing business over there or for purchasing properties over there (similarly for Muslims who were forcibly displaced from India)

(8)- Mehbooba also said that "India should also start engagement with Pakistan as they did to stop ceasefire violations". There is no harm for India (rather advisable before going to world-community) in talking to Pakistan if it agrees for plebiscite in united-J&K and Balochistan (by vacating these regions) and for said dual-citizenship

(9)- The USA knows it that if Mehbooba tries (through said plebiscites & ‘dual citizenships) to achieve Greater India and recovery of Rs 1,000 Trillion State-capital then Afghanistan (as a member of SAARC) will happily join such Greater-India (as a precursor to SAARC) and nothing will gladden more the hearts of the leader of the free world the USA than Afghanistan becoming a member of “Secular-Democratic-Federal-Socialist-Hindi Rashtra” with attendant full cooperation from the USA for realizing such Greater-India.

It is hoped that Mehbooba Mufti will play a historical role in bringing peace, prosperity and justice to Indian subcontinent, as mentioned above (through Greater-India), which will automatically solve the chronic & gory Kashmir problem too.