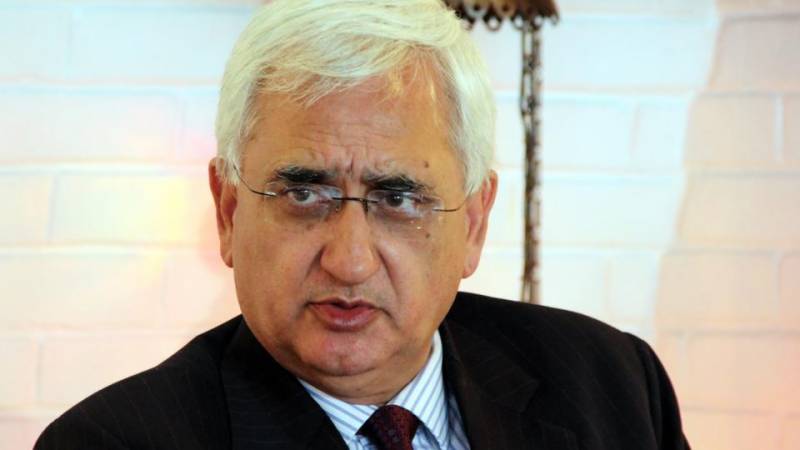 Exaggerated similarity of Hindutva with ISIS & Boko-Haram could  become issue because Salman Khurshid is underestimating Islam and is wrongly supporting the  SCI on Babri-masjid judgement which in a legally objectionable manner has embolden Hindutva forces.

--This refers to on-going controversy over recently released book “Sunrise on Ayodhya” written by Congress leader and former Law & Foreign-affairs Minister Salman Khurshid against which Courts have been moved to ban this book as reported at  “https://www.livelaw.in/news-updates/delhi-high-court-salman-khurshids-book-sunrise-over-ayodhya-challenged-185562  . Due to this controversy the house of Khurshid has also been vandalized and a part of it set on fire in Nainital (Uttarakhand) allegedly by ‘Bajrang Dal’ (an element of Hindutva forces) as reported at https://timesofindia.indiatimes.com/city/dehradun/khurshids-nainital-home-shot-at-portion-set-on-fire/articleshow/87724167.cms .

Before analyzing this controversy it should be noted that new words (Hindus, Hinduism, composite Hindus and Hindutva) have been rightly coined to understand the contemporary situation. Hence 'HINDUS' (over 80 % of Indians who are practicing 'HINDUISM' in any name & form like Sanatan etc), 'COMPOSITE HINDUS'  [Hindus + Sikhs + Jains + Budhists as per Article 25 (2) Explanation II of Indian Constitution who's, as per RSS, "Punya-bhumi is also Bharat'']  and ‘HINDUTVA’ (an ideology being practiced by some Hindus through RSS which believes in misusing Indian State for furthering the interest of Hinduism and harming the interest of other religionists specially Muslims) are proper words. The similarity of Hindutva with ISIS & Boko-Haram drawn by Khurshid is of-course exaggerated but the message is correct that Hindutva is trying to misuse religion to influence politics & State of India.

The Congress party compromised with secularism since the days of Gandhi (before, during and after partition) in a milder & subtle way but the RSS through various elements of Hindutva forces (BJP, VHP / Bajrang Dal etc) has been subverting crudely and violently (especially since Ayodhya movement) by influencing (in legally objectionable manner) the Indian State and its functionaries not only its administration and security forces but judiciary also (about which insightfully has been written in the book “Who Killed Karkare? The Real Face Of Terrorism In India” ) by S.M. Mushrif (This book, by a former senior police officer, with a distinguished career that included unearthing the Telgi scam, peeps behind the propaganda screen, using material mostly in the public domain as well as his long police experience. It comes out with some startling facts and analysis, the first of its kind, to expose the real actors behind the so-called "Islamic terrorism" in India whose greatest feat was to murder the Maharashtra ATS chief Hemant Karkare who dared to expose these forces and paid with his life for his courage and commitment to truth as mentioned at https://www.goodreads.com/en/book/show/10587044-who-killed-karkare-the-real-face-of-terrorism-in-india ). In this controversy about Khurshid's book the following are important:-

(1)- This controversy and even violence by Hindutva forces against Khurshid’s book has become possible because Hindutva forces has become emboldened due to un-Islamic cowardice of Indian Muslims who have failed to file a petition in the Supreme Court of India (SCI) for the legally expected restoration of of status-quo-ante of Babri-masjid.

(2)- Khurshid or other Congress leaders like Rahul Gandhi, Digvijay Singh, Ghulam Nabi Azad, Chidambaram etc who are recently giving statements (about Khurshid’s book or otherwise) in favor of secularism and against Hindutva, lack political integrity because they are not showing enough political courage to encourage Indian Muslims to file this petition in SCI for restoration of status-quo-ante of Babri-masjid.

(3)- Khurshid says in his interview to the media about this book (https://www.youtube.com/watch?v=-V-fzBoezts and   https://www.youtube.com/watch?v=s6pU2LXR3to ) that ‘Mera kartavya hai Hindu and Muslims ko ek karna ’ (my duty is to unite Hindus & Muslims ) and to protect Hindu dharma. Now what to say about the wisdom of Khurshid who thinks that these ‘noble’ objectives can be achieved (A)- By emboldening these ‘luchhe-lafange’ (the rowdies-lumpens as per Khurshid) of Hindutva forces, through SCI Babri-masjid Judgement (bad in law) (B)- By asking Indian Muslims to adopt said un-Islamic cowardice and (C ) By destroying rule-of-law in India.

(4)- The SCI could give such a legally objection judgement in Babri-masjid case because the SCI is an institution which knows about xyz of law (especially criminal law) without knowing abcd of it for the simple reason that technically it is not a Court. A Court can’t be under siege but like High Court Delhi the SCI is also under siege of Delhi police due to ‘so-called’ threat from terrorists. If the SCI (with plenary powers and jurisdiction under Article 141, 142 and 143 of the Constitution) itself is not 'nirbhay' (fearless) how will it make India, 'nirbhay' though it is the main purpose of criminal law.

(5)- Indian Muslims were repeatedly asked by me through national & international media to move the SCI for restoration of status-quo-ante of Babri-masjid (one such is given at https://thinkworth.wordpress.com/2017/03/30/babri-masjid-muslim-leaders-are-going-against-muslims-and-islam/ ) but Indian Muslims say that they are afraid which is un-Islamic fear because Muslims are supposed to fear only Allah.

(6)- The composite-Hindus despite 1947 partition on the basis of religion (and huge loss of lives, blood, properties and honor of Hindus too during partition) opted for secular democracy because it is pro-powerful-modern science & technology which requires free mind and which is possible only in secular democracy. Therefore if Khurshid is really interested in secular democracy in India then he should ask the Indian Muslims without any further delay to file a petition in the SCI under Article 142 of the Constitution for reviewing the 2019 judgment in Ayodhya dispute and for legally expected restoration of Status-quo-ante of Babri-masjid (before any final judgment in Ayodhya title suit) which was demolished in 1992 in the presence of the Observer of SCI (because otherwise, it shall be lowering the authority of court which is criminal contempt even on the part of SCI under section 2 ( c) (i) read with section 16 of Contempt of Court Act.

(7)- In this petition, prayers should also be made that the SCI should direct the GoI to be ready to requisition ‘UN Peace Keeping Force’ (UNPKF) in case communal Hindutva forces create massive law & order problems all across the country (if security forces of India can go in other countries for maintaining peace through UNPKF then security forces of other countries can also come in India for maintaining peace through UNPKF).

8)- In this SCI petition, it should also be mentioned that there was no mention  in ‘Ramcharitmans’ (which was written in that period by Goswami Tulsidas) of Ram ‘Janmbhumi’ (birthplace) at Babri-masjid site hence it is a clinching evidence against the arguments of Hindus. Moreover if Babri-masjid was constructed on a demolished temple then there was such a practice in the old days so the Hindus also demolished many temples of Jains and Buddhists. Hence about the demolition of Hindu temples by the then Muslim invaders and rulers, Hindus are unnecessarily complaining.

Salman Khurshid said in this interview that (being a Muslim) he is grateful to (Hindu majority) India which has given him so much (including cabinet ministry of government of India of Law & Foreign-affairs) hence it is expected that he will realize that the thousands of innocent (mainly the Muslims) who all across India lost their lives, blood, properties and honor due to Babri-masjid dispute (including in Gujarat in 2002), will not be the last if rule-of-law is not (restored in India by the SCI by restoring status-quo-ante of Babri-masjid before any final verdict in it) otherwise this glaring destruction of rule-of-law in India by the SCI will continue to harm the basic interests of other Indians too.