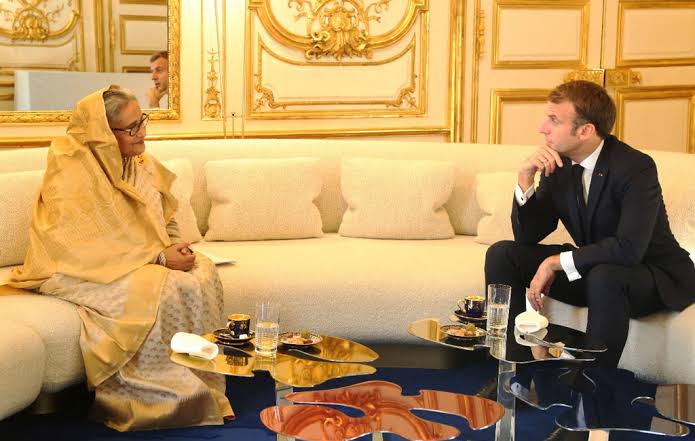 France has historical relations with Bangladesh. Bangladesh's contact with France dates back to the war of liberation. Relations between Bangladesh and France have historically been cordial. The foundation of this relationship was laid in the distant past.

The contribution of the French in the liberation war of Bangladesh is also memorable. The French writer and thinker Andre Malraux said that he considered the war of independence of Bangladesh as his own war. He also expressed his desire to come to this country to take part in this war.

Also, during the war of liberation, a humanitarian French youth named Jean Kay tried to hijack a Pakistani airliner (PIA) to demand medicine and medical supplies for Bangladeshi refugees who had taken refuge in India.

After this incident, the French government decided to help Bangladesh and 20 tons of medicine and medical supplies were delivered to the Indian refugee camps. Even in the post-independence period, good relations have always existed between Bangladesh and France.

Recently, Bangladesh’s Prime Minister Sheikh Hasina completed an important and multidimensional visit to France which has added a new dimension to Bangladesh and France relations.

She visited Paris from November 9 to 13 at the invitation of French President Emmanuel Macron. The visit could start the journey of taking the partnership between the two countries to a strategic level. Earlier, Sheikh Hasina had a bilateral meeting with Emanuel Macron at Elysee Palace in December 2017.

Just as Dhaka seeks the support of a major power like Paris in its development journey, so too France seeks to sell trade, investment and security equipment to a growing Bangladesh. A number of MoUs as well as a letter of intent in the security sector were signed during this visit.

During the Prime Minister's visit, a memorandum of understanding on defense cooperation was signed between the two countries on November 10. On the same day, Sheikh Hasina had a meeting with the President of France Emanuel Macron.

The two leaders discussed issues of mutual interest, taking the bilateral relations further, celebrating the 50th anniversary of diplomatic relations between the two countries, and other issues of international and regional importance.

As a developing country, Bangladesh wants to continue its trade with France, its largest export market. At the same time, it seeks to diversify its sources of investment, the import of French goods at affordable prices, and the procurement of security equipment for the implementation of the Forces Goal 2030. France is one of Bangladesh’s largest trading partners and development partners.

France is currently the fifth largest export destination for Bangladesh. There is scope for further expansion of this commercial communication. France is a country rich in art and literature.

Representatives of the Federation of Bangladesh Chambers of Commerce and Industry signed a memorandum of understanding with MEDEF International to boost bilateral trade and investment at the France-Bangladesh Business Council Meeting in France on November 10.

France is one of the world's leading exporters of heavy industries such as bullet trains, warships, and submarines. So, Bangladesh can benefit if trade relations with France improve. The Prime Minister called upon French businessmen to invest in Bangladesh. Different industries can also be developed through joint ventures of the two countries.

On the other hand, the possibility of exporting new products from Bangladesh to France should also be explored. Cooperation between the two countries can also be strengthened in the fields of education and industry and culture. Relations between Bangladesh and France continue to grow, which is desirable.

Economic opportunities are being created in Bangladesh. France wants to take advantage of that. France is also interested in selling military products. The country is more interested in selling Rafale warplanes, training aircraft, radars, simulators, e-Visa, nuclear power plants and other products. According to the website of the French Embassy in Bangladesh, for the first time in 2020, French Defense Minister Florence Parle and Chief of Air Staff Philippe Lavigne visited Dhaka.

As a key member of NATO, France and the country were experienced in building weapons. Bangladesh has the defense capability and France is interested in the Forces Goal 2030.

The head of Airbus, Europe's largest aircraft manufacturer met with Prime Minister Sheikh Hasina. The head of Thales, a company that sells high-tech products, including satellites and radar, also met with BD PM.

After buying a few aircraft from Boeing in the United States, many companies want to sell the aircraft to Bangladesh. Airbus is one of them. On the other hand, Thales is selling military and civilian radar in Bangladesh.

The top leadership of France had discussed with the Prime Minister several times in bilateral and various forums, adding that the growing development of Bangladesh has attracted the attention of France. The visit could be considered as a major step forward in establishing multidimensional and strategic relations. France wants to see its presence in Indo-Pacific on a larger scale and they want Bangladesh as a partner in the region. Bangladesh is currently the chair of the Indian Ocean Rim Association which has further increased Bangladesh’s importance.

France has its own Indo-Pacific strategy. Through this visit, both sides got an opportunity to know each other's views on the issue. Recent AUKUS issue has created some kind of distance between France and UK, USA, Australia. France lost a billion dollars (90 billion) business deal. Thus, France needs some alternative markets. France needs Bangladesh to sell its military gadgets. The recent Defense pact between France and Bangladesh is just an example to understand this.

France got a business partner in its ongoing crisis moment with the US, UK, and Australia. Reshaping ties with Bangladesh can give France some sort of comfort. It is true that France is bothered by the AUKUS issue.

According to the reports of media outlets, Prime Minister Sheikh Hasina also expressed happiness over the outcome of her visit to France in November last and hoped to sustain the momentum in the coming years.

“I am indeed very happy with the discussion and outcome of my France visit November last and hope to sustain the momentum in the coming years,” she said.

The prime minister came up with the remarks while French Ambassador Jean-Marin Schuh paid a farewell call on her at her official Ganabhaban residence here on December 19, 2021.

The prime minister thanked French President for inviting her on an official bilateral visit to Paris in November last.

During the discussion, Sheikh Hasina said that Bangladesh has historical bondage with France because the French government and its people supported Bangladesh during its Liberation War in 1971.

The French envoy informed the premier that her government will provide 1.2 million Covid-19 vaccines under the Covax this week.

He said France is going to take up chairmanship of European Union next February and set to hold an Indo-Pacific summit with the countries of the region in the same month.

He said they would invite Bangladesh in the Indo-Pacific summit.

The envoy also said that a joint communiqué was signed between France and Bangladesh which covered many aspects of the relations of the countries.

Economic and political relations between France and Bangladesh is enhancing, he also said.

About the impact of the Covid-19, Sheikh Hasina said that all countries have suffered consequences due to the Covid-19 pandemic.

“We have huge population. We carried forward our economic activities despite the pandemic,” she said.

On the other hand, Bangladesh is one of the most affected countries due to climate change and France has always supported the issue of justification for overcoming the damage. Apart from this, Paris has been supporting Dhaka in various forums including the UN Security Council on the Rohingya issue.